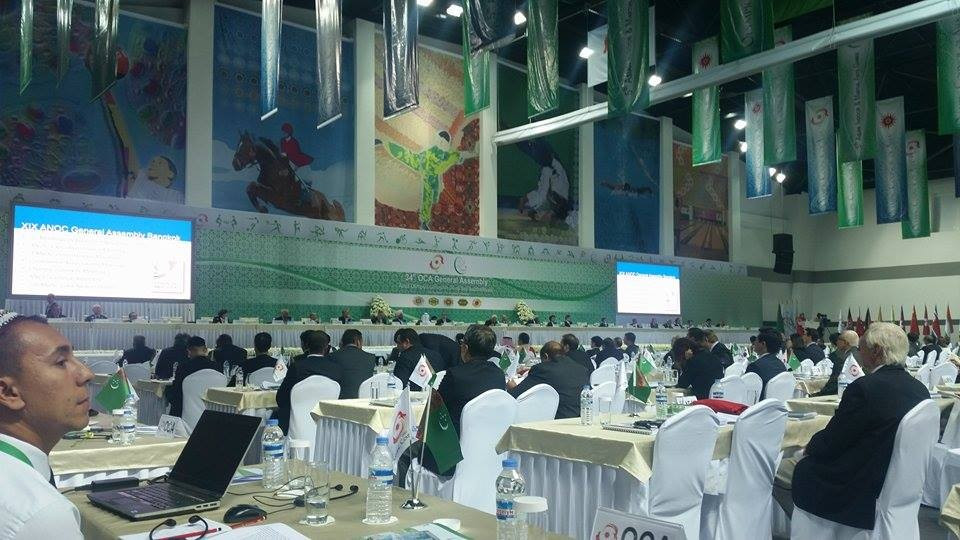 This followed an election in Ashgabat, Turkmenistan, rather than in Afghanistan itself, during the OCA General Assembly, just two days after Hashimy resigned following 17 months at the helm.

The official, who had previously held the role before resigning in 2014 and has also served as security advisor for the chief executive officer of Afghanistan, Abdullah Abdullah, gained sufficient support from National Federation representatives present to be elected.

Both IOC director of National Olympic Committee Relations Pere Miró and OCA President Sheikh Ahmad Al-Fahad Al-Sabah described the result as legitimate during the OCA General Assembly in Turkmenistan's capital Ashgabat, adding that they hope this will resolve problems with governance in the nation.

Miró told insidethegames afterwards how they were happy with the conduct of the election, adding how it was imperative to find a solution so as to best benefit athletes.

But Hashimy was quick to declare the vote as illegal and void on the grounds that those present were not legitimate representatives of the National Federations and that statutory obligations to wait 21 days after a resignation to have an election had not been met.

In a lengthy series of statements sent to insidethegames, Hashimy and his supporters within the federations explained how he resigned following a lengthy dispute with what he saw as "illegally elected" Executive Board members, including Aghbar.

"The heinous desires of the Executive Board Members compelled them to gather persons who were never validly elected office bearers of their National Federations and most of them were not even endorsed federations to be part of the A-NOC," alleged the statement.

"It was Mr. Hashimy who took the initiative of not giving up to the unfair and irrational demands of the sports mafia and kept on informing and corresponding all these actions with the OCA and IOC."

After expressing "utter shock and surprise" that Aghbar's mandate has been accepted by the OCA and IOC, the statement concluded by claiming how this "clearly shows that a global sports mafia that works to promote the interests of a few individuals who want to remain in power runs OCA and IOC".

However, any wrongdoing has been strongly denied by the OCA, with Haider Farman, the director of the Asian Games Department who has worked closely with both sides, telling insidethegames how, to the best of their knowledge, the election here was fair and legitimate.

Hashimy was invited to Turkmenistan, but did not take up his offer, Farman said.

Any further grievance held by Hashimy and his allies should be taken to the Court of Arbitration for Sport, he added, something Hashimy has said since he will "maybe" do on behalf of the NOC.

The election of Hashimy last year was hailed by many as a turning-point, with the 35-year-old, one of the nation's most successful businessmen who owns private television network 1TV, declaring how he would create a "world-class" National Olympic Committee.

He introduced several changes to make the organisation independent from the country’s Government, but was faced with a constant stream of opposition and other challenges, and was reportedly forced to personally finance the Afghan team at last September's Asian Games himself due to a lack of funding from other sources.

The situation which has boiled over in the last week is clearly multi-faceted, and some have described it as the most "complex issue in the Olympic Movement today".

But if the election will bring an end to the conflict as the OCA and IOC so hope, much depends on the reaction of Afghanistan Government officials, and early indications are they may support Hashimy rather than Aghbar.

This all comes after a decision was made this week to shift Afghanistan from the South Asia to the Central Asia regional OCA grouping on the grounds that they have more in common with other members of the latter group, which also includes Kazakhstan, Kyrgyzstan, Tajikistan, Turkmenistan, Uzbekistan and fellow new entrant, Iran.

Both of Afghanistan's Olympic medals have been bronzes won by taekwondo player Rohullah Nikpai at Beijing 2008 and London 2012.

Nikpai is another to have criticised A-NOC under Hashimy's leadership in recent months, claiming they failed to intervene against officials from the Afghanistan National Taekwondo Federation, who allegedly stole money designed for athletes.