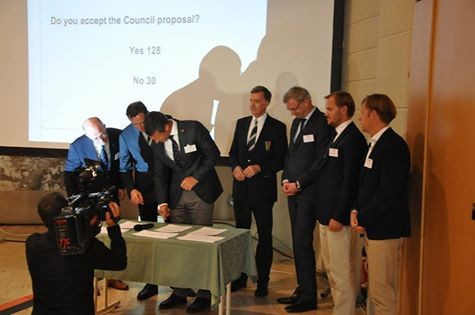 The International Rowing Federation (FISA) Congress in Aiguebelette backed the recommendation by the world governing body's ruling Council to give the event to Linz-Ottensheim, voting 128 votes to 30.

The Austrian candidate, a joint bid between the city of Linz and Ottensheim, a municipality in the district of Urfahr-Umgebung in the Austrian state of Upper Austria, was backed ahead of Hamburg because FISA's Council claimed that the risk of disruptive wind was less at Linz-Ottensheim, while broadcast coverage in Hamburg would only be able to take place from motor boats.

Linz-Ottensheim, which hosted the Championships in 2008, also promised to temporarily close the connection to the Danube during the event so that there will be no influence on the racing lake.

As the event will be a major qualifying event for the following year's Olympics and Paralympics in Tokyo, "racing conditions take a higher priority" the Council said.

Linz-Ottensheim had also hosted a successful World Under-23 Championships in 2013.

It will be the third occasion the World Rowing Championships have been held in Austria since it was launched in 1962.

They have previously taken place in Vienna in 1991.

Other key decisions taken by the Congress included elections for several key Commissions.

Germany's Lenka Welch was voted onto the Athletes' Commission, America's Paul Fuchs to the Equipment and Technology Commission, Alain Lacoste to the Sports Medicine Commission, Lithuania's Algirdas Raslanas to the Youth Rowing Commission and Britain's Guin Batten, an Olympic silver medallist in the quadruple sculls at Sydney 2000, to the Rowing for All Commission.

Also, owing to a casual vacancy in the Executive Committee, Belgium's Patrick Rombaut, hair of the Umpiring Commission, was elected to serve until the end of 2017.

Finally, the delegates formally attributed the 2016 Ordinary Congress to Rotterdam to be held on August 29.

As in previous years, the meeting will follow the conclusion of the World Championships, due to take place in the Dutch city between August 21 and 28.