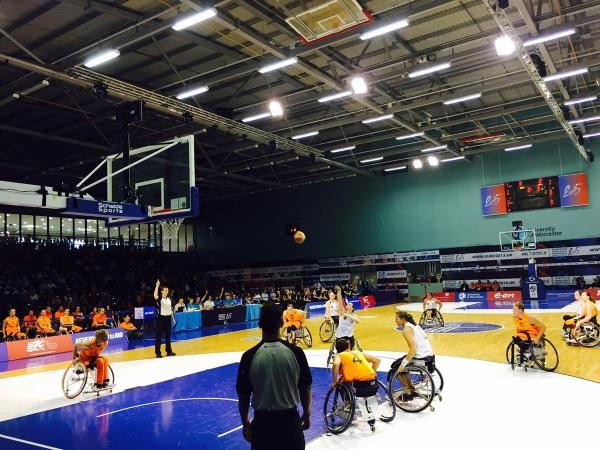 Germany reclaimed the women’s European Wheelchair Basketball Championship title from The Netherlands, beating the defending champions in a closely fought final at the University of Worcester in England, while Britain secured the men's gold for the third consecutive edition.

The two countries had won every edition of the Championships since the inaugural tournament in 1974 with Germany having secured the most titles with nine, but they missed out in 2013 when The Netherlands earned their fifth crown.

With revenge a key motivator, the German team began the final in impressive style and moved into a 22-10 lead by the end of the opening quarter, in front of the watching Countess of Wessex.

By half-time the match became a far tighter affair, however, as the Dutch team rallied back to move to within eight points with the score at 39-31, with the gap being maintained by the close of the third quarter as Germany held a 55-47 lead.

The German team were able to hold the Dutch challenge in the final quarter to ensure a triumphant 10th title after achieving a final score of 72–62.

Hosts Britain were able to join Germany and The Netherlands on the podium after cruising to victory over France in the third place play-off.

The destination of the bronze medal rarely looked in doubt as Britain raced into a 39-13 lead at the halfway mark in the contest and they continued to stretch their advantage with further sharp shooting in the final two quarters.

At the close of play Britain had sealed a comprehensive 69-39 victory, which ensured they earned bronze for the fifth consecutive time at the European Wheelchair Basketball Championships.

Their was further success for the hosts as their men's team secured gold after winning a highly entertaining gold medal match against Turkey, which was played in front of a excitable home crowd.

The tie looked in the balance at the halfway mark with Britain having only a nine point lead at 34-25, but they were able to extend their advantage in the remaining two quarters to secure a 87-66 point win to retain their title.

They would be joined on the podium by Germany after they earned a 74-56 triumph over The Netherlands.