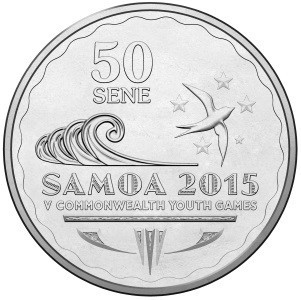 The Samoan Government has announced a commemorative coin to celebrate the 2015 Commonwealth Youth Games, due to get underway with the Opening Ceremony here today, has been released.

The silver coin will be available to buy at Central Bank of Samoa, Samoa Post Office and the Tuinaimato Sports Complex, the central hub of the event, and features the logo of the Games on a nickel-plated piece.

There are nine different packs to collect to represent the sports on the programme for the 2015 Games - aquatics, athletics, rugby sevens, archery, boxing, weightlifting, tennis, lawn bowls and squash - and the 50 sene coins were minted at the Royal Australian Mint.

The piece of Commonwealth Youth Games memorabilia will cost WS$20 (£5/$7/€6.50) and Central Bank Governor Maiava Atalina Ainu’u-Enari described the coin as the “perfect keepsake” from the Games.

“Whether you’re an athlete, supporter, coach, spectator, or would just like to remember this great moment in Samoa’s sporting history, this collectible coin is the perfect keepsake,” she said.

“This is a very exciting time for Samoa, and we are honoured to be able to put our support behind all of the junior athletes in this way.

“I can see these coins shared with pride by those who attended the Games for years to come.”

The 2015 Games feature around 1,000 athletes and officials from 66 Commonwealth countries who will compete in nine sports during the event.

A total of 107 gold medals are on offer and the fifth edition of the Commonwealth Youth Games is set to be one of the largest-ever sporting events to be held on the Pacific island.

For the 2011 Commonwealth Games in the Isle of Man, Pobjoy Mint released a special £2 coin to commemorate the event, which featured official mascot Tosha the cat.