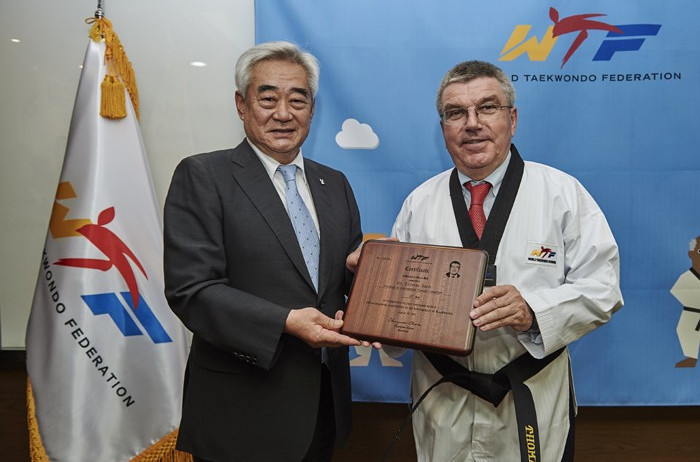 International Olympic Committee (IOC) President Thomas Bach has become only the fourth man to be made an honourary 10th Dan black belt in taekwondo, the World Taekwondo Federation (WTF) has announced.

He was given the award during his visit to the WTF headquarters in Seoul as part of a tour of South Korea, which has also seen him meet South Korean President Park Geun-hye to discuss progress in Pyeongchang's preparation for the 2018 Winter Olympic and Paralympic Games.

At a special ceremony, Bach, dressed in full taekwondo uniform, smashed a wooden board with a punch before he was officially given the 10th Dan black belt.

"It was a great honour to have President Bach and his delegation visit our offices today," WTF President Chungwon Choue said.

"There have only been three people in the world awarded the 10th Dan.

"The belt is reserved for individuals who have made an outstanding contribution to the development of sport and promotion of peace and harmony around the world.

"At the WTF we are committed to being an excellent partner to the IOC and making a valuable contribution to the development of the Olympic Movement.

"Under President Bach’s leadership and Olympic Agenda 2020 I have no doubt we are headed for a bright future."

Following the ceremony, Bach, along with WTF President Choue, attended a round-table meeting with other officials including Pyeongchang 2018 IOC Coordination Commission chair Gunilla Lindberg, where taekwondo’s preparations for Rio 2016 and Tokyo 2020 were on the agenda.

The Taekwondo Humanitarian Foundation, an upcoming initiative from the WTF, which will aim to use the sport to promote friendship, respect and understanding in refugee camps, was also discussed.

Choue also informed Bach of the way taekwondo is addressing gender equality, a key theme of Agenda 2020, mentioning how women are now taking up the sport in countries where female participation is traditionally low.