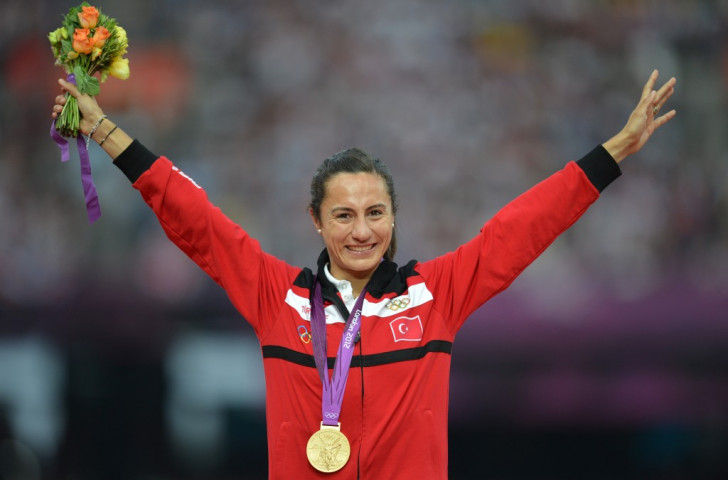 London 2012 Olympic 1500 metres champion Asli Cakir Alptekin of Turkey has been stripped of her gold medal and handed an eight-year doping ban, it has been announced today.

In what represents another blow to the sport ahead of the International Association of Athletics Federations (IAAF) World Championships in Beijing, due to begin on Friday (August 22), the decision was reached after the Court of Arbitration for Sport (CAS) confirmed the athlete had reached an agreement with athletics' governing body.

Alptekin had been originally cleared of doping by the Turkish Athletics Federation (TAF) back in December 2013 after abnormalities with her blood levels were found in her athlete biological passport, resulting in her missing the World Championships in Moscow in August the same year.

Her team-mate and training partner Gamze Bulut looks set to inherit her compatriot's gold medal, with Maryam Yusuf Jamal of Bahrain likely to be upgraded from bronze to silver.

Russian Tatyana Tomashova, who initially missed out on a podium finish after coming fourth, could be retrospectively given bronze.

Tomashova, a two-times world champion, however, was among six Russian athletes who received two-year doping bans for manipulating drug samples on the eve of Beijing 2008 and is widely believed to be among athletes under suspicion for doping at the 2007 IAAF World Championships in Osaka.

Alptekin, who has not competed since being provisionally suspended by the IAAF in 2013, has forfeited all her results since July 29, 2010, and these also include the European Championships title she won in Helsinki three years ago.

Bulut is again set to benefit, being promoted from silver to gold.

Alptekin had already served a two-year suspension in 2004 following a positive ddrugs test at the World Junior Championships and the 29-year-old, who clocked 4min 10.23sec to win the race in London, is perhaps fortunate to not have been given a lifetime ban from the sport.

"The Consent Arbitral Award ratifies a settlement agreement signed between the parties relating to abnormal values found in blood samples collected from the athlete between July 2010 and October 2012," a CAS statement read.

"Ms Cakir-Alptekin is found to have committed a second anti-doping rule violation, after a first one committed in 2004, and shall serve a period of ineligibility of eight years, to expire at midnight on 9 January 2021.

"Furthermore, all competitive results obtained by the athlete from 29 July 2010 onwards are disqualified, and all related titles, awards, medals, points and appearance money are forfeited."

The ruling also stated that the eight-year ban is the maximum for a second blood doping offence.

Alptekin's victory at London 2012 came as a shock and followed her improving by a substantial 17 seconds over the course of the year.

"The Turkish Olympic Committee (TOC) is aware of the decision by CAS to uphold the IAAF’s original charges," a TOC statement sent to insidethegames read.

"This robust punishment sends a clear message to would-be cheats.

"The TOC, the Turkish Government and all sports authorities in Turkey have a zero-tolerance policy on doping in sport.

"Sport is in the fabric of Turkish society and we are committed to protecting its integrity.

"We will continue to work hard with the Turkish Anti-Doping Agency to ensure that any athletes found guilty of using banned substances will be punished to the full extent of Turkey’s comprehensive anti-doping legislation, other laws, and in accordance with international anti-doping practices and we will continue to fight for the complete eradication of drugs in Turkish sport.”

The development comes amid one the worst doping crisis to hit the sport after IAAF data was leaked to German TV station ARD and British newspaper The Sunday Times which allegedly revealed more than 800 athletes had given blood samples that were "highly suggestive" of doping or "abnormal".