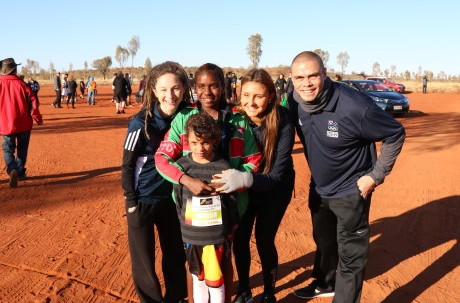 The Australian Olympic Committee was represented by five Olympians in the 2015 Indigenous Marathon Project's Deadly Fun Run Championships in Uluru, also known as Ayers Rock, to mark 30 years since the world-famous landmark was given back to its original owners.

Two-time Olympian hurdler Kyle Vander-Kuyp, rugby sevens star Tanisha Stanton, set to be part of the Australian team for Rio 2016 where the sport will make its debut, and fellow race walker Beki Smith were also involved.

The Deadly Fun Run Championships, an initiative established by the IMF also includes events for juniors and IMF founder and director Rob de Castella, the 1983 marathon world champion, praised the inspiration that having Olympians take part gave to some of the younger participants.

“I love seeing the kids participate, but also the older Aboriginal men and women getting involved.”

De Castella hopes the Championships will enhance the profile of indigineous Australian people, using running as a method to help develop sport among their communities.

Vander-Kuyp, who has also competed at three Commonwealh games, was delighted to be part of the event, claiming he got a real “buzz” from running alongside a young primary school boy from Alice Springs during the three  kilometres junior event.

“We ran together chatting for the whole race, and we finished together,” he said.

“I felt such a buzz and was so happy to be involved in this run.”

The IMF also selects a group of 12 indigenous Australian men and women, who get the chance to train and compete at the New York City Marathon, the largest marathon race in the world.

These athletes, aged between 18 and 30, then help out with the Deadly Fun Run Championships in various capacities.

The event itself has been going since 2012 and offers prize incentives for each of the different races.