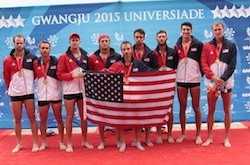 United States claimed the flagship men's eight title on the final of three days of rowing action at the Gwangju 2015 Summer Universiade.

On a day of heavy rain across the venues, the US crew led from the start and powered home impressively to cross the line first in 5:37.30.

Ukraine finished over three seconds behind in second place while The Netherlands were a further second back in third.

"All in all the men's team performed to my expectations," said US men's head coach Gregg Hartsuff afterwards.

"We prioritised the eight in selection, and those guys really started clicking the past few weeks.

“They went to the line very confident and ready to unleash on the field, which they did.

"They led from coast to coast and never were in jeopardy of losing it really, opening up the margin to open water with a powerful sprint that pulled away from the field.

"It pretty much went exactly as we planned."

Lithuania enjoyed the best of the rest of the action on the water, with Zygi Galisanskis claiming the men's single sculls title while compatriot Lina Saltyte triumphed in the corresponding women's race.

Elsewhere, there were two victories for Japan on a busy day of artistic gymnastics apparatus finals, with Naoto Hayasaka and Yu Minobe winning the respective men's pommel horse and women's beam events.

Gymnasts from the US, Great Britain, Russia, China and Armenia all also secured gold medals.

But there was more success for South Korean hosts, as the Asian nation swept four of the five gold medals in compound archery, a remarkable achievement as the country had until recently only focused upon events using the Olympic recurve bow.

The only one which got away was the women's team event, where Russia beat the US gold, as South Korea had to settle for bronze.