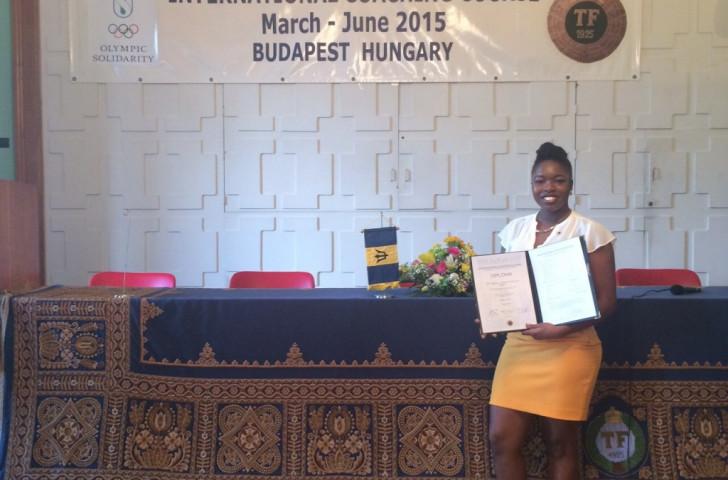 Eastwood spoke of her pride in attending the course, held in the Hungarian capital of Budapest, which is designed to develop excellence in coaching.

She graduated with a 4.64 general average and she has been offered congratulations by the BOA.

Other graduates include Sadehg Karbassi of Iran, Malaysian Peitty Wong, and Gyorgy Voroshe of Hungary.

Participants are able to enhance their skills in theoretical, technical, and practical aspects of coaching and they are taught by various industry leaders, qualified coaches, sports scientists, and experts in international sport.

The course, which runs over an intense three month period, is attended by coaches from all over the world and Barbados have a rich history in participating in the event.

In previous years, they have sent representatives from sports including basketball, table tennis, volleyball, swimming and athletics.

The course itself features a “General Subjects” part, which teaches attendees a broad range of topics such as in sport physiology and psychology, as well as instructing them on Olympic Movement values.

This particular part of the ICC encompasses around 120 hours of tuition and also deals with conditioning, sport sociology, injuries and sport and nutrition.

The ICC also includes a more practically-focused unit in “Sport Specialisation”, based on skills, drills and other training methods, which takes up 180 hours.

As part of that section of the course, participants are able to visit local Hungarian sports clubs in order to hone their abilities even further, giving them access to real-life coaching situations.