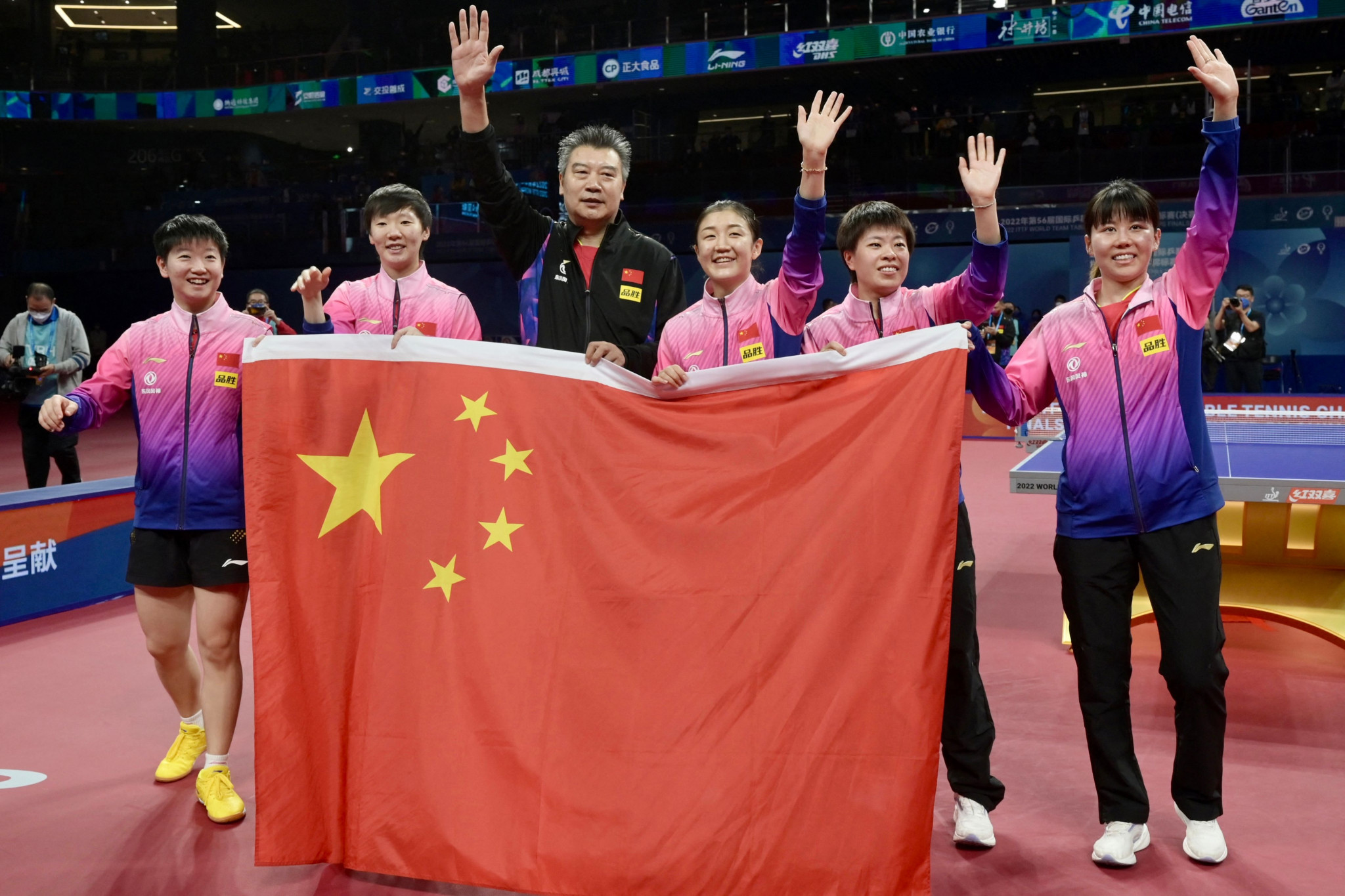 Hosts China underlined their dominance of the World Team Table Tennis Championships in Chengdu by maintaining their perfect record to clinch the women's title at the expense of Japan.

It was the fourth consecutive edition of the Championships in which China have beaten Japan in the final, and a repeat of the favourites' 3-0 victory over the same opponents in last year's decider at the Tokyo 2020 Olympics.

Women's singles Olympic champion Chen Meng got the hosts off to an ideal start in the final, beating Miyuu Kihara 11-6, 11-8, 11-8 at the Chengdu High-tech Sports Centre.

Ito took the second game 11-9 to cancel out Wang's lead after she won the first by the same scoreline, but the home favourite notched 12-10 and 11-5 victories to move China to the brink of another title.

Sun Yingsha provided the crowning touch with a comfortable 11-7, 11-7, 11-8 triumph over Miyu Nagasaki.

Chen insisted that China's record 22nd victory at this event was a real team effort.

Sun Yingsha grabs the final win against Miyu Nagasaki for Team China ?? to be crowned the champions of #ITTFWorlds2022! ?

"For today's victory, I have to say that I think the special significance lies in the location here in China," she said.

"It was actually the second time that our three girls were able to cooperate with each other following the Tokyo Olympic Games.

"I should say that through this cooperation, throughout this whole process, each has built greater mutual trust.

"This victory belongs to all of us, this whole team, including three members and our coach Mr Li, Wang Yidi and Chen Xingtong.

"Our five members have the greatest strength.

"I believe that this trophy belongs to us all."

In the men's tournament, China are due to face Germany in tomorrow's final as they did at Tokyo 2020, after both teams recorded thrilling 3-2 wins against Japan and South Korea respectively.

Benedikt Duda came from behind to beat Jang Woo-jin 10-12, 11-7, 11-7, 11-7 to put Germany in front, but An Jae-hyun and Cho Seung-min hit back for South Korea with victories against Dang Qiu in four games and Kay Stumper in five respectively.

China's men's singles world champion and Tokyo 2020 silver medallist Fan Zhendong got the hosts off to a flying start to their semi-final with an 11-5, 12-10, 11-4 victory against Shunsuke Togami of Japan.

Tomokazu Harimoto responded by coming from one game behind to beat Wang Chuqin, only for China's back-to-back men's singles Olympic champion Ma Long to restore their lead 8-11, 11-5, 11-5, 11-2 against Mizuki Oikawa.

Harimoto notched his second win of the match in five games against Fan, but Wang bounced back from his defeat to provide the telling touch with a 12-10, 11-7, 11-4 victory against Togami.

South Korea and Germany both take bronze medals, with the World Team Table Tennis Championships set to conclude tomorrow with the men's final between China and Germany.