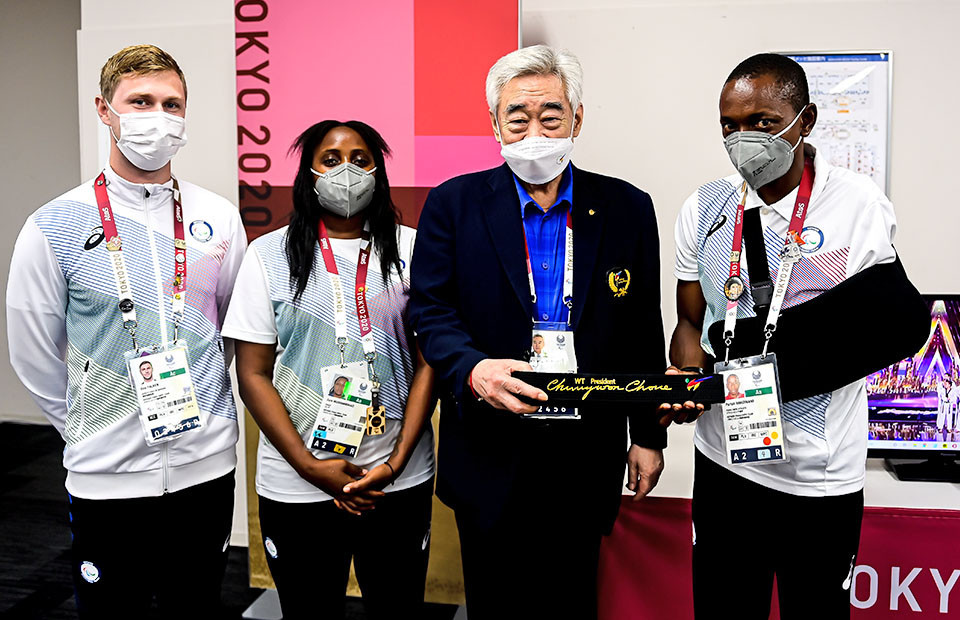 The South Korean met with the Refugee Paralympic Team star on the last day of taekwondo competition at Tokyo 2020.

He praised Hakizimana for all he has achieved before presenting him with the belt.

The refugee lost his opening-round match in the men's under-61 kilograms tournament to Nathan Torquato of Brazil, who went on to win gold.

But just making the Games was a phenomenal achievement as Hakizimara lives in the Mahama Refugee Camp in Rwanda.

He fled civil war in his native Burundi in 1996 and was shot in the arm at the age of just six, on the same day his mother died.

Both his parents had died by the time he was 11 and his arm was permanently impaired, but he has been given fresh hope by taekwondo.

At Mahama he was made a coach by the Taekwondo Humanitarian Foundation - which teaches the sport to displaced people and refugees around the world.

He organised a taekwondo school and has trained more than 1,000 children.

"To come here a lot of people helped me," he said in Tokyo.

"I would like to thank the children that I teach at my refugee school back in Rwanda - they helped me.

"And I want to thank the refugees around the world - I hope that people love each other through sport."

Hakizimara entered the African Championships in Rwanda in 2017 and won his first bout before falling in the quarter-finals.

He won a gold medal at the 2018 Ambassador's Cup, where he was named best athlete.