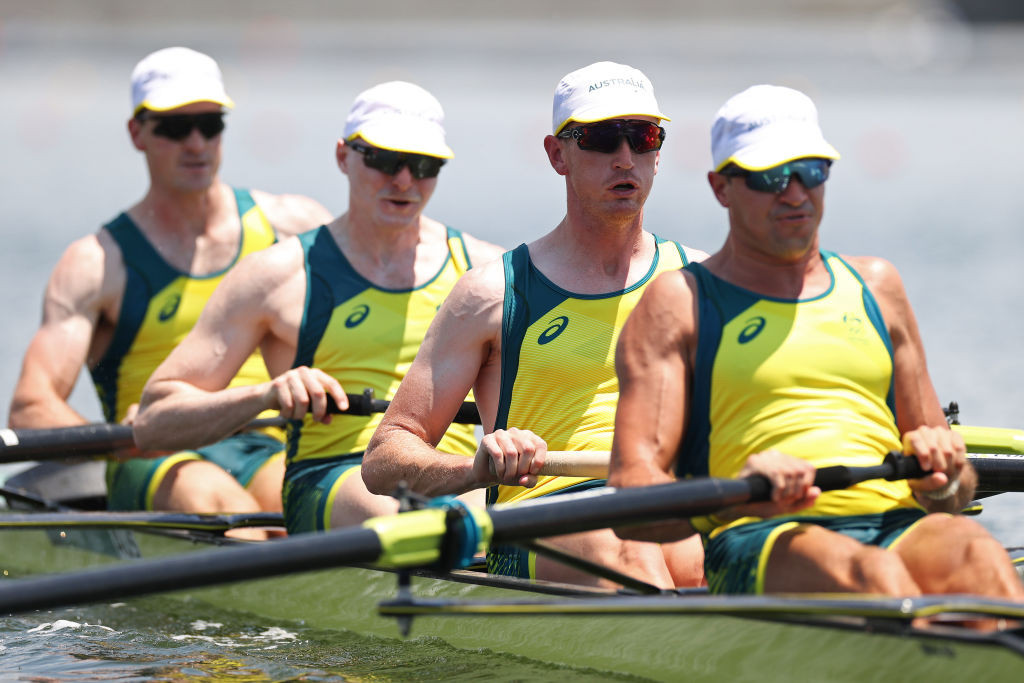 The Australians had concentrated their resources on reclaiming an event that has been British property ever since Steve Redgrave, Matthew Pinsent, James Cracknell and Tim Foster won at Sydney 2000.

Britain’s quartet of Matthew Rossiter, Oliver Cook, Rory Gibbs, Sholto Carnegie, world bronze medallists in 2019 and European champions last month, dropped out of medal contention in the closing stages of the race, at one point almost colliding with eventual bronze medallists Italy, who finished 0.84 seconds off the winners, with Romania coming through for silver at 0.37.

Hargreaves commented: "We obviously wanted to win it back for Australia, it’s been a long time, it’s been, what, 25 years since the 'Oarsome Foursome', and a lot of crews have come close.

"Hilly just missed out in Rio.

"I was watching him in the pub last time in Rio so it was good to be out there today and help him get it over the line."

Britain's Rossiter reflected: "We’ve tried our best, but we really screwed up there at the finish.

"It's obviously devastating that we didn’t win today.

"Everything you do has a cost, and we really put ourselves in a position to try and win it, and maybe that’s the reason the wheels really came off at the end."

Commenting on the boat hitting Matteo Castaldo's oar: "We cost them a silver, and sorry to those guys.

"It’s tough at the best of times when it’s not too windy; and it’s pretty choppy out there, and your vision’s blurry, and your body is going stiff with lactic acid, and it’s sometimes hard to stay on the ball."

Britain’s fortunes took an unexpected upturn in the men’s quadruple sculls final, however, as they earned a surprise silver - having qualified through the repechage - behind a Dutch crew that set a world best time of 5:32.03.

Harry Leska, Angus Groom, Tom Barras and Jack Beaumont led to the halfway point, and while they could not respond when Lucas Uittenbogaard, Abe Wiersma, Tone Wieten and Koen Metsemakers surged past them, they held on to finish 1.72 seconds back, with bronze going to Australia at 1.94.

That was the first of six world best times to be set on the day.

Dutch crew member Lucas Uittenbogaard accepted that there was pressure involved in being favourite, saying: "Of course there's pressure if you're world champion of 2019 - you have to deal with that, to not focus on that, to focus on what we do best, and that's rowing.

“We had to stay cool, stay relaxed, and focus on the good rowing.”

In the last of the finals, China added the Olympic women's quadruple sculls title to the world title they won in 2019 with a dominant display that saw that come home more than two lengths clear in a world best time of 6:05.13.

Silver medallists Poland were more than six seconds behind, with bronze going to Australia, who finished 6.95 seconds behind the winners.

That followed the first Olympic rowing medal for Ireland’s women, a bronze earned by Aifric Keogh, Fiona Murtagh, Emily Hegarty and Eimear Lambe in the women’s four, which returned to the Olympic programme for the first time since Barcelona 1992 as part of the International Olympic Committee’s drive for gender equality at the Games.

The gold went to Australia in an Olympic best time of 6:15.37, with The Netherlands just 0.34 seconds behind them after a thrilling duel that took place over the closing stages of the race.

"I think all the hard work was really, really worth it."

Veronique Meester, from the Dutch boat, commented: “For a moment I thought we were going to pass the Australians, but it just couldn’t happen, but we’re very, very proud."

Earlier, France and The Netherlands battled to the line in the men's double sculls final, with the French pairing of Hugo Boucheron and Matthieu Androdias finishing two tenths of a second clear in an Olympic best time of 6:00.33.

The Dutch pair of Melvyn Twellaar and Stef Broenink claimed silver ahead of China's 2019 world champions Zhiyu Liu and Liang Zhang, who had led for the first half of the race and took brone  3.30sec back.

The opening final of the day, the women’s double sculls, had set a high benchmark as Romania's Ancuta Bodnar and Simona Radis were rewarded for a bold early move in the women's double sculls final, winning in an Olympic best time of 6:41.03.

New Zealand’s Brooke Donoghue and Olivia Loe, who beat Romania to world gold in 2019, finished 3.79 seconds back, with bronze going to the Dutch pair Roos de Jong and Lisa Scheenaard, 4.70 off the leaders.