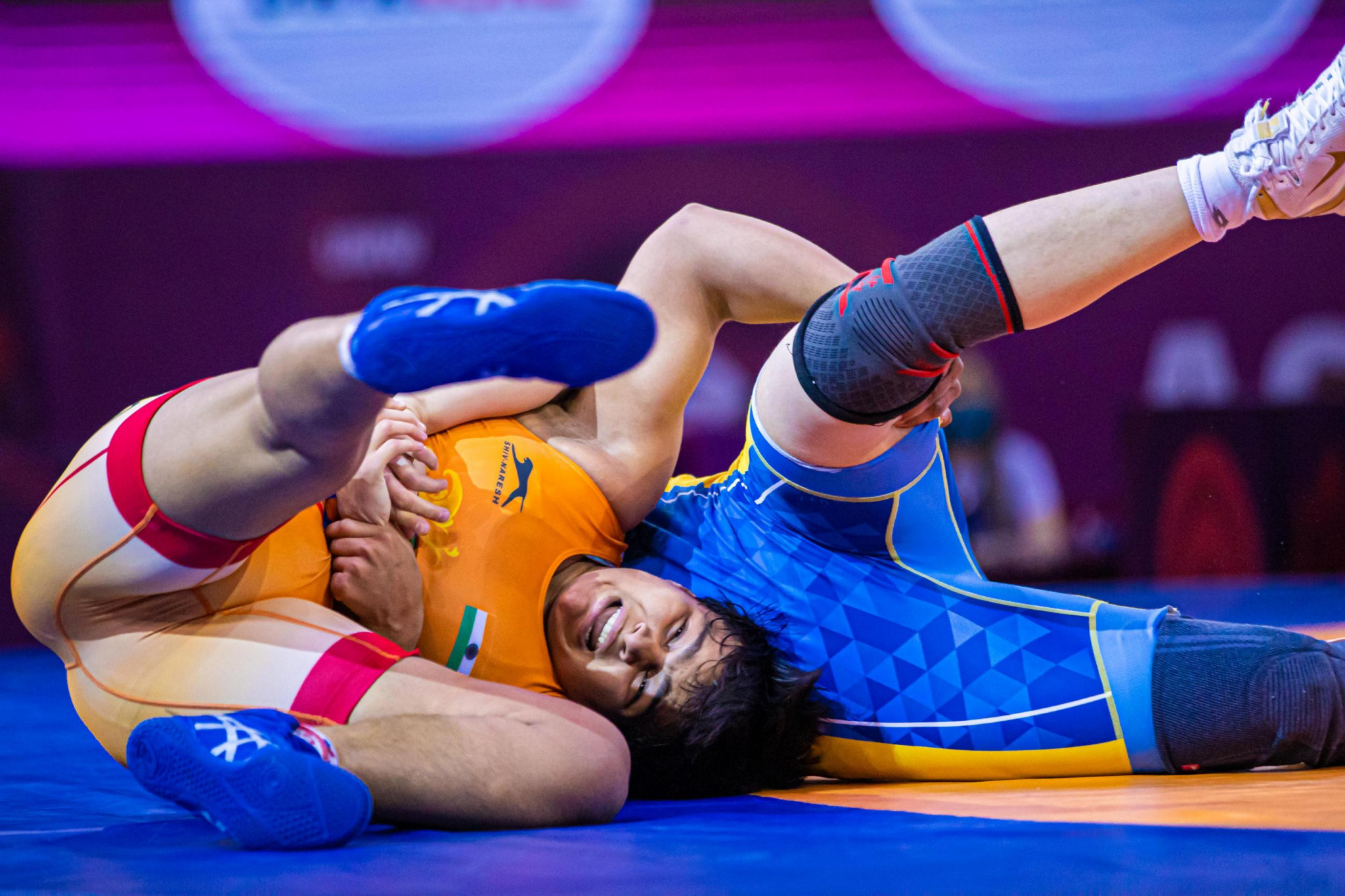 A day after India had its first ever two-time women's champion at the United World Wrestling (UWW) Asian Championships in Almaty, through Sarita in the 59kg class, Divya Kakran became the second by securing the 72kg title with a match to spare.

By the end of the day at the spectator-free Baluan Sholak Palace of Culture and Sports her colleagues Vinesh in the 53kg class and Anshu Anshu in the 57kg class had won further golds, with Sakshi Malik adding a silver in the 65kg category.

Kakran, the 68kg champion a year ago in New Delhi, won both of her round-robin matches in the early session - including an 8-5 victory over defending champion Zhamila Bakbergenova of Kazakhstan - to assure herself of gold regardless of the outcome of her final match in the later session.

The absence of the powerful teams from Japan and China - due to COVID-19 concerns - has created better medal opportunities for their continental neighbours, although it has necessitated a round-robin group format for all women's weight classes due to the reduced entries.

Kakran said that she nearly passed up the chance to compete at Almaty after failing to earn a spot at the Asian Olympic qualifier at 68kg by losing out at the Indian trials but relented upon parental advice.

She was also concerned about a lack of match sharpness after having wrestled just once since last year's Asian Championships and having had COVID-19.

"I have not been wrestling well for some time now," she told UWW.

"The trials in India were one of my worst performances.

"So I was not thinking of participating in 72kg, but my father asked me to.

"I was thinking that if I didn't wrestle good in 68kg, how will I win the trials in 72kg?

"But I managed to and I have wrestled well here.

"The difference here is that I am wrestling without pressure.

"In India, I am wrestling with a lot of expectations from myself."

Vinesh, who had previously amassed a collection of seven Asian medals, struck her first gold as she defeated Chinese Taipei’s Meng Hsuan Hsieh in the 53kg final by a fall.

"The main aim was to wrestle the Japan and China wrestlers, but they are not here," Vinesh had said earlier in the day.

“If there is a gold medal on the offering, I will take it."

After her win Vinesh, who earned a place at the Tokyo 2020 Olympics by winning a bronze medal at the 2019 World Championships in Nursultan, added: "Everyone knows this is an Olympic year and it’s already my third competition so I am feeling good.

"I have participated in, I think, eight Asian Championships, and for the first time I am winning a gold medal.

"I had waited for this moment."

Anshu, a bronze medallist in 2020, had secured one of the two spots available at the Asian Olympic qualifier held at the same venue earlier this month.

Rio 2016 Olympic bronze medallist Sakshi Malik had won six Asian medals without earning gold, and she was left searching after being defeated in the 65kg final via fall by Mongolia’s Bolortungalag Zorigt, for whom this was a first title after three bronze medals.

India might have had a shot at a sweep of the day's five golds, but rising star Sonam Sonam, who has also qualified for the Tokyo 2020 Olympics, had to default her matches at 62kg due to a knee injury suffered last week.

That prevented what would have been an intriguing clash between her and world champion Aisuluu Tynybekova of Kyrgyzstan, who stormed into the final with two technical falls and continued in the same vein with an 11-0 win over Mongolia’s Bolorotuya Khurelkhuu.

Uzbekistan’s Rushana Abdirasulova won bronze on a decision over home wrestler Irina Kuznetsova after they had finished at 4-4.

The Championships now conclude with two days of freestyle wrestling.