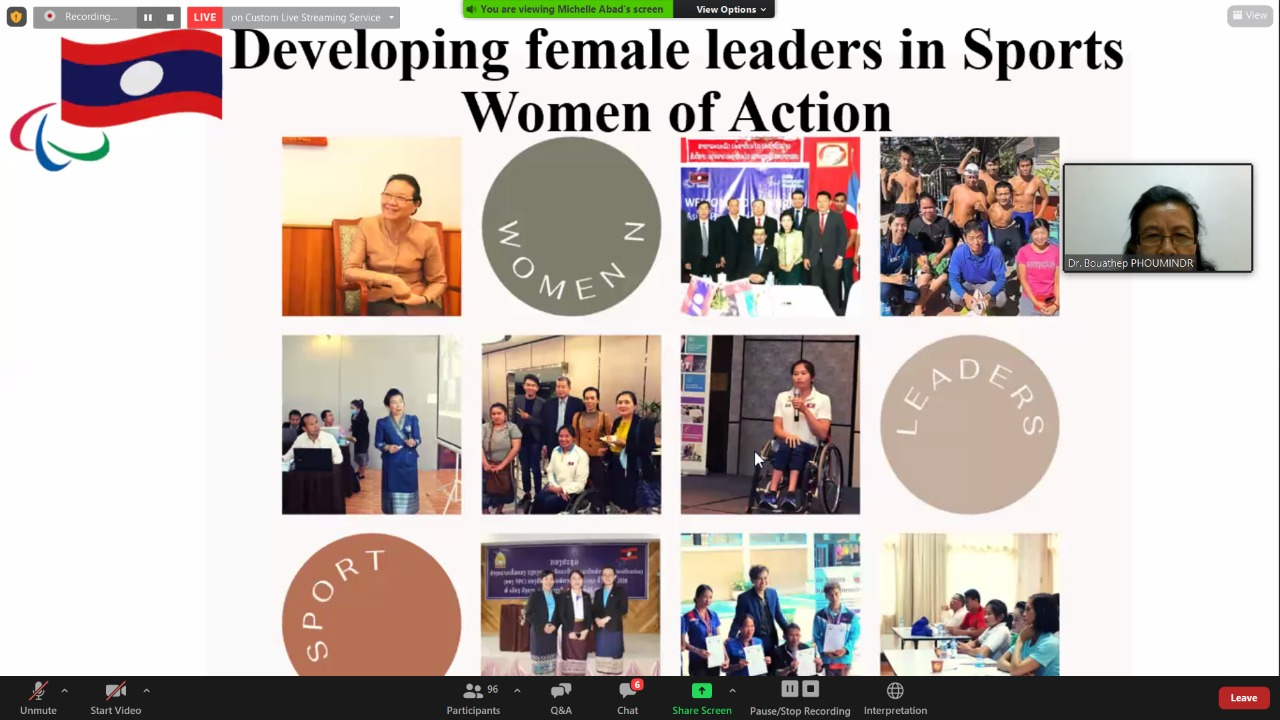 The virtual seminar was titled  "Women in Paralympic Sports in the Middle East and Asia".

It was arranged as a follow-up to a workshop held in Tokyo in September 2019, with the seminar held on the second day of the fifth Asia Congress.

The Congress focused on high-performance sport with COVID-19 and the future of sport in Asia.

A focus was placed on the activities of National Paralympic Committees over the past 18 months including initiatives undertaken during the coronavirus pandemic.

Four of the 11 National Paralympic Committees (NPCs) that participated in initial workshop took part in the seminar and outlined their efforts to promote female athletes in their respective countries.

A keynote speech which was delivered by Rita van Driel, IPC Women in Sport Committee chairperson, on the topic "Women in Leadership".

Van Driel outlined figures from the Rio 2016 Paralympic Games which demonstrated the need to increase the number of female athletes, especially in the nations that send small teams to the Games.

Van Driel highlighted the importance of understanding the cultural barriers that are preventing women getting involved in sport in order that these can be overcome.

She also stressed the importance of promoting role models to provide inspiration and motivation to young women.

Case studies were provided by the NPCs of Saudi Arabia and Yemen.

The former presented on the measures that it has taken that have increased the number of female athletes and coaches in a number of sports.

Saudi Arabia is expected to have its first female representative at the Tokyo 2020 Paralympic Games in athletics.

NPC of Yeman official Amal Haza'a Ali Munassar presented on an initiative that has been undertaken in partnership with the International Committee of the Red Cross to create a women’s wheelchair basketball programme.

As we celebrate #InternationalWomensDay, APC highlights some of the work being done in the region to support the development of women in Para-sport. 💪🙌🎉

Webinar on Women in #Paralympic Sports in the Middle East and Asia held. https://t.co/53xIEFdksp#WomeninSPORT #IWD2021 pic.twitter.com/eBggBXeAMu

The seminar heard how the war in Yemen had worsened the situation for disabled women, increasing their social isolation and impacting their emotional well-being.

Amal explained how cultural obstacles where women are kept at home and out of view of society had to be overcome before initially two teams had been set up.

This has now been expanded to five teams with 30 players and the aim is to take part in an international competition.

Presentations were given by the NPCs of Cambodia and Laos, with both organisations highlighting how they had established women’s sport committees and are seeking to boost the number of female athletes and coaches.

Cambodia will host the ASEAN Para Games in 2023.

APC chief executive Tarek Souei said the seminar had highlighted great initiatives which are underway in the region.

"I especially enjoyed the uplifting story from Yemen which has demonstrated the power of sport to change women’s lives," Souei said.

"We know that there is much to do to increase the participation of women in Para sport at all levels across our region but today has shown that there is a lot of energy and determination being brought to this task.

"I’d like to thank the IPC, the Japan NPC, the Japanese Sports Council and the Sport for Tomorrow initiative for supporting these efforts through this seminar."