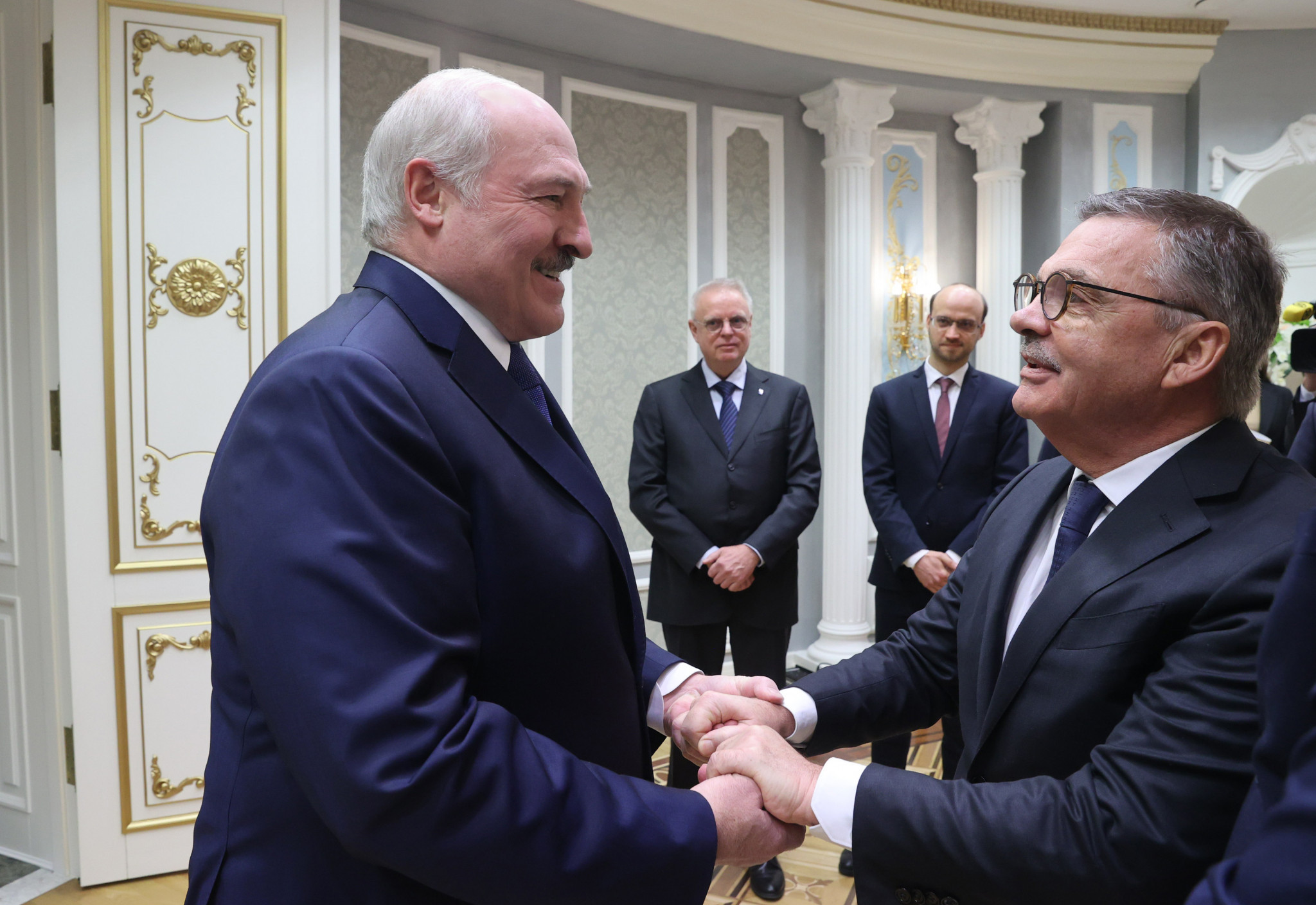 International Ice Hockey Federation (IIHF) President René Fasel has claimed a meeting with Belarus President Alexander Lukashenko was held with "a serious tone" and was to "open and maintain a constructive dialogue" on this year's Men's World Championship.

The event is set to be held in Minsk and Riga from May 21 to June 6, but there have been repeated calls to strip Belarus of the hosting rights, including from the Latvian Prime Minister, amid a violent crackdown on protestors following Lukashenko's disputed re-election in August.

An IIHF Expert Group has expressed "scepticism" over the reporting of COVID-19 cases in Belarus following a review into the situation, which opened up the possibility of the tournament being moved away from the country on health grounds.

Fasel insisted his recent visit to Belarus was an attempt to solve these problems but warned the country could lose the co-hosting rights unless it meets a series of criteria set out by the IIHF.

"To solve these problems we needed to open and maintain a constructive dialogue with the Belarusian leadership, as it starts with the Government," Fasel said.

"We came in with specific requirements that the government should fulfill in order that the World Championship can take place in Minsk.

"Among these was a pledge to find peaceful solutions towards improving the socio-political situation within the country, and to allow all Belarusian athletes the opportunity to return to and compete in their respective sports.

"Most importantly, the Belarusian Government agreed to an open and constructive dialogue with the opposition to take the 2021 IIHF World Championship out of the political focus and to use sports as a mean to bring people together."

Fasel said the intention was still to have Minsk and Riga co-host the tournament, but only if there was evidence the Government was trying to fulfill the IIHF's conditions.

"If we move forward with Minsk as a tournament host, we also must establish a system where we can be assured that the Belarus Government is taking concrete actions towards fulfilling the pledges made to the IIHF, otherwise it will not be possible to hold a World Championship in Minsk due to the elevated safety issues," he said.

"We expect to receive soon an overview of the Belarus government action items covering the specific IIHF requirements that were presented in Minsk.

"These are key issues touching operational and socio-political points related to the World Championship and we cannot move forward if these action items are not initiated soon."

Despite claiming no other options for the World Championships were being considered, Fasel revealed the IIHF had received proposals from Denmark and were in discussions with Slovakia to potentially host the event.

Switzerland's Fasel also addressed criticism of his trip to Belarus, met with a significant backlash after he was filmed warmly embracing Lukashenko and pictured with Belarusian Ice Hockey Association President Dmitry Baskov, being investigated by the IIHF for his role in an alleged murder.

The Belarusian Sport Solidarity Foundation claimed the "cordiality and warmth" of the meeting between Fasel and Lukashenko "gave the impression that the meeting was not taking place in the country where more than 30,000 people have been imprisoned during the past four months and where about 170 political prisoners are still behind bars."

According to Yle, IIHF vice-president Kalervo Kummola said the pictures emerging from the visit were "pretty shocking".

"We regret the negative reaction that was caused by the pictures and videos that came from the meeting," Fasel, an International Olympic Committee (IOC) member, said.

"As mentioned before, IIHF delegations regularly meet with government leaders of a World Championship host country.

"We had a video call with the Latvian Prime Minister a few months ago, but for this visit we felt it was absolutely necessary to meet with the President of Belarus in person.

"We requested this meeting because we wanted the opportunity to talk to the President directly and use our position to bring our concerns directly to the leadership, so that they understand the seriousness of the situation.

"If we made the impression that it was a just a friendly meeting, this is not accurate and was not our intention.

"This meeting was taken in a serious tone and with the IIHF bringing specific and difficult questions to the table."

The IOC refused to condemn Fasel's picture with Baskov and the video footage of the IIHF chief embracing Lukashenko when asked whether it was appropriate conduct by one of its members.

"We are concluding from media reports that this visit and the discussions Mr Fasel had were in his capacity as President of the IIHF," an IOC spokesperson told insidethegames.

"This was not a mission in any way related to the IOC, on the international side, nor to the NOC of Belarus, on the national side.

"Mr Fasel was clearly consulting with the Head of State about the IIHF World Championships."

Lukashenko, who also heads the National Olympic Committee of the Republic of Belarus (NOCRB), was re-elected President last year in elections dismissed as being neither free or fair by the European Union among other international observers.

Lukashenko, his son Viktor and Baskov were last month banned from attending next year's postponed Olympic Games in Tokyo, with three officials found by the International Olympic Committee to have "not appropriately protected the Belarusian athletes from political discrimination within the NOC, their member sports federations or the sports movement".

During the meeting with Fasel, Lukashenko claimed there would be "no issues" if Belarus was kept host of the World Championship.