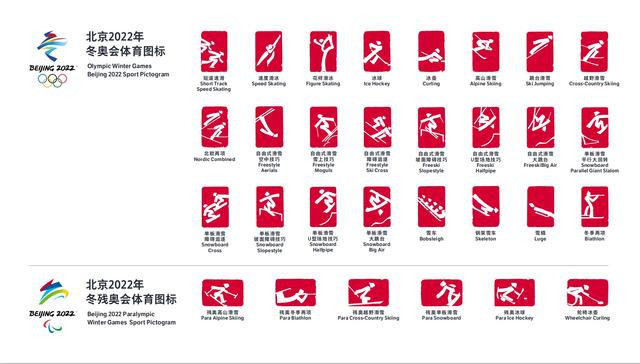 Organisers of the 2022 Winter Olympic and Paralympic Games unveiled the pictograms for the event at a countdown ceremony in China today.

The 24 pictograms were revealed to the world for the first time during the ceremony, which Beijing 2022 said was attended by top sportspeople and celebrities in the host country.

They depict each of the disciplines across the seven sports on the Winter Olympic programme, while six symbols identify the sports at the Winter Paralympics.

According to Beijing 2022, the pictograms were designed "based on traditional Chinese seal engraving" and "embody both the motion of winter sports and China’s rich culture in modern graphics".

The release of the images is seen as another key milestone for organisers in the build-up to the Games.

Gao Tian, deputy director of the culture and ceremonies department at Beijing 2022, said the unveiling of the pictograms "marks the progress in our preparations for the Olympic and Paralympic Winter Games Beijing 2022 over the past year in a visually strong fashion".

"It is another example of presenting time-honoured Chinese art in a modern way and integrating the quintessence of Chinese culture into sports presentation on the Olympic and Paralympic stage," added Gao.

Graphic elements of the pictograms were designed by the same group as the emblems of the Games, led by Lin Cunzhen, an associate professor at the China Central Academy of Fine Arts.

Designers said they used Beijing 2008 pictograms as inspiration for the Beijing 2022 images.

Tong Lixin, head of the sports department at Beijing 2022, said the pictograms had been praised by International Federations (IFs).

"We followed their suggestions to make some adjustments to certain details, which put the icing on the cake," Tong said.

"Eventually, all IFs approved the design with high praise for its innovation and unique Chinese style."

The Beijing 2022 Winter Olympics are due to run from February 4 to 20, with the Winter Paralympics scheduled to follow between March 4 and 13.