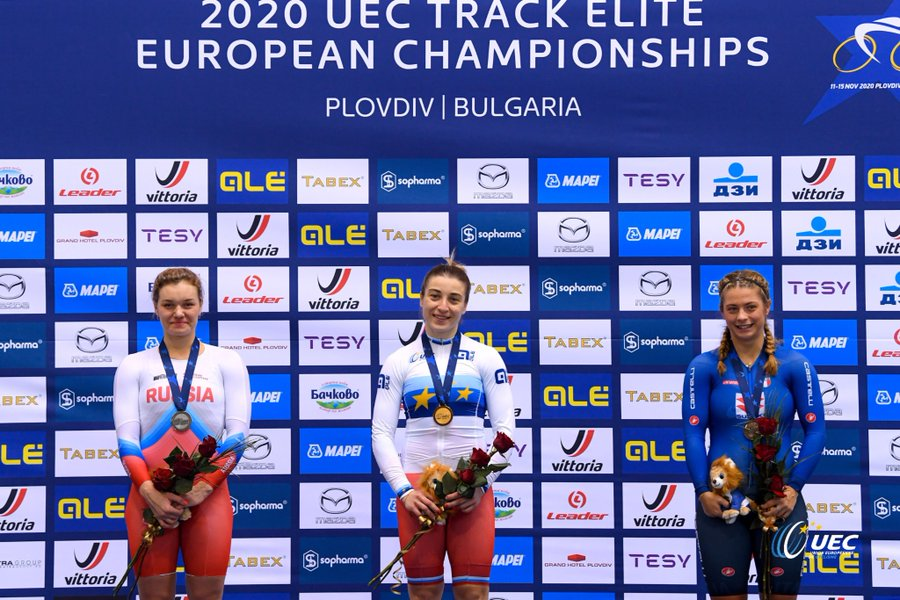 Shmeleva emerged as the winner of the women’s 500 metres time trial event ahead of team-mate Anastasiia Voinova, with the Russian duo trading places on the podium from the sprint event two days earlier.

A time of 32.720 seconds proved enough for Shmeleva to secure the European title for the third time in the discipline, following success in 2016 and 2018.

Voinova was left settling for silver in a time of 33.719.

The Russian duo both ended the European Championships with two gold and one silver medal to their names, having triumphed together in the team sprint on the opening day of competition.

Italy’s Miriam Vece completed the podium in the time trial event, as she stopped the clock in 33.769.

Elisa Balsamo and Vittoria Guazzini triumphed in the women’s madison after winning the crucial final sprint of the event.

The Italian pairing had won seven of the 11 sprints contested but found themselves trailing Diana Klimova and Maria Novolodskaya, after the Russians earned 20 points for gaining a lap on the field.

Balsamo and Guazzini beat their rivals in the final sprint, which carried double points.

The 10 points gained saw the Italian duo finish on an overall total of 52, while the six points won by Klimova and Novolodskaya gave them a final tally of 51 for second place.

Britain’s Laura Kenny and Elinor Barker placed third after accumulating 38 points in the sprints during the event.

Spain’s Sebastian Mora and Albert Torres won the men’s madison, which was raced over 200 laps of the Kolodruma Velodrome.

Mora and Torres topped the standings on 51 points.

Portugal’s Ivo and Rui Oliveira finished as the runners-up on 43.