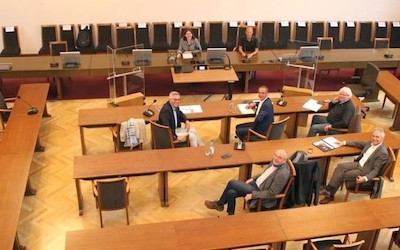 The Presidents of the German Rowing and Canoeing Associations have led calls for the facility used for the rowing regattas at the 1972 Olympic Games in Munich to be renovated prior to the 2022 European Championships in the German city.

Currently the site acts as a base for several local sports clubs while more than 2,000 recreational and competitive athletes also use the area.

Earlier this year, Munich City Council cancelled the budget for the extensive refurbishment of the facility.

The sports clubs on the regatta course and their central associations support the calls, and say they want to apply to the city council for €15 million ($17.6 million/£13.5 million) to be made available for the renovation in 2021 and 2022.

The second edition of the European Championships is due to take place in Munich in 2022, with rowing one of nine sports set to be included on the programme.

Canoe sprint is one of four new additions to the European Championships programme, and both that and rowing could potentially be hosted at the facility.

"We all hope that the Munich City Council will take this decision in 2020 and that the funding for the redevelopment, which has been significantly reduced, contrary to the original resolution, will be released in 2021," said DRV President Kaidel.

"Since it is foreseeable that the planned €15 million will not be enough to completely and fully refurbish the facility, the clubs based at the regatta facility propose to coordinate the priorities of the refurbishment measures within the budget with the city," added Konietzko.

The priority for the refurbishment is investment in sanitary facilities and a complete renovation of the jury building.

In the outdoor area, the entire footbridge would have to be reinstated as would the bunker toilets next to the grandstand.

"This unique facility is too important for club and recreational sports and for the countless relaxation seekers to be allowed to rot," say Kaidel and Konietzko.