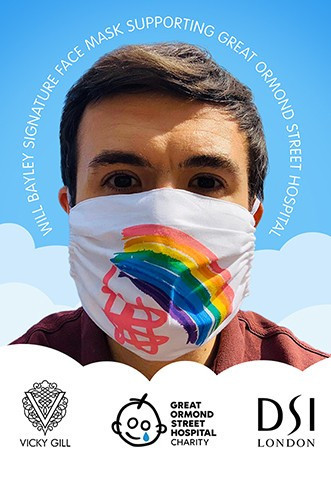 The 32-year-old was planning to compete at the Paralympic Games in Tokyo this summer, having recovered from an anterior cruciate ligament injury attained while performing on the British television show Strictly Come Dancing.

His aim of returning to competition was marred by the delay of Tokyo 2020 by one-year due to the coronavirus pandemic.

Competition is now scheduled to take place from August 24 to September 5 next year.

With an extended break from sport, Bayley decided to sell rainbow face masks to raise money for the famous children's hospital in London.

The Briton spent a lot of time at the medical facility life for treatments on his arthrogryposis, a rare congenital disorder that affected all four of his limbs, and the Non-Hodgkin's Lymphoma that he was diagnosed with aged seven.

"Like everyone, I’ve had a bit of spare time so me and my friend David Morgan wondered whether we help out Great Ormond Street Hospital because they had an emergency appeal for extra funds," Bayley said.

"I had my contacts from Strictly and Vikky Gill, who is the head designer for the show, said she would donate some face masks.

"We thought we’d just donate a couple of hundred but we’ve ended up doing so many more and it’s gone really well.

"It means everything for me to be able to give back to Great Ormond Street.

"I can honestly say that they saved my life so anything that I can do for them feels great."

Bayley also revealed the postponement of Tokyo 2020 had been a benefit.

"Lockdown was really hard because I had the injury on Strictly then I had a few weeks rehabbing and then I went straight into it," he said.

"It’s been a massive challenge rehabbing on my own and it’s been hard not having the routine I’ve had every single day.

"My brain didn’t know what to do but I feel like I’ve now adapted well.

"I would be playing in the Paralympics if it was next month but to be fully fit I need more time.

"With an ACL injury I think it would be brilliant if I was 100 per cent fit in January.

"But the Paralympics suspension has allowed me to reflect for the first time in my career and that’s going to stand me in really good stead for 2021 because I’m happier than I’ve ever been."

Bayley earned Paralympic gold at Rio 2016 in the individual class seven event, having claimed silver in the same competition at London 2012.