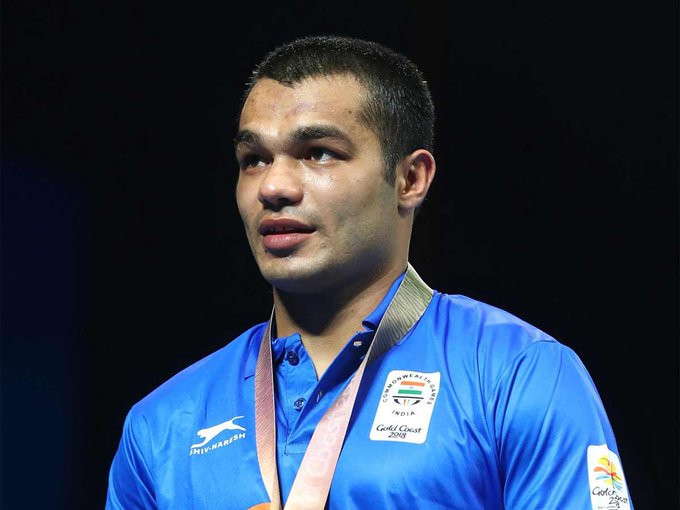 Indian boxer Vikas Krishan Yadav, who is set to fight at the Tokyo 2020 Olympics, has asked for his home nation and Pakistan to resume sporting ties to promote peace.

Yadav said that a boxing tournament would be a "great idea" and claimed there are boxers across the border that share his sentiment.

He detailed an experience at the South Asian Games last year where he met a Pakistani boxer who also wanted the nations to work together again.

"India and Pakistan also must unite for the betterment of the people, however, I would also suggest that Pakistan needs to stop favouring terrorism and promise to be our good neighbour, then there is no harm in playing with them.

"I think a boxing tournament between India and Pakistan could be a good way of promoting the sport.

"I would ask both Pakistan and India that it would be better if they live with love and affection."

God's Plan: A determined @officialvkyadav is ready to bury ghosts of past Olympics

Veteran #TeamIndia🇮🇳 boxer and 2-time Olympian Vikas Krishan believes that the #Tokyo2020 postponement is part of a divine plan for him; is leaving no stone unturned!https://t.co/l7mppnj82v

Yadav is currently training in Bellary in the state of Karnataka ahead of his third trip to the Olympics next year, having represented India in 2012 and 2016.

He made the quarter-finals at Rio 2016 at middleweight and has qualified for the postponed Tokyo Games at welterweight.

India and Pakistan's rivalry goes back to the controversial partition of India by the British Empire, a bid to create two religious states.

The division displaced around 14 million people and it is estimated to have contributed to the deaths of between 200,000 and two million people.

To date, there are still border disputes between the nations in the Kashmir regions, as well as ultra-nationalistic politics directed at their neighbours.

"Humanity is above all," added Yadav, who won middleweight gold at the 2018 Commonwealth Games in Gold Coast and the Asian Games title in 2010.

"Soldiers die and their families suffer – we must understand that the need of the hour is to help each other rather than getting into an ugly fight."

#Kashmir is still under siege one year on since the revocation of Article370. A shocking violation of human rights has followed yet the world remains silent. My solidarity is always with the people of Kashmir who have suffered so much so often #freedomforkashmir #prayforkashmir pic.twitter.com/EdBf0PhKxO

British boxer Amir Khan, who is of Pakistani origin, shared a similar view recently, asking the two nations to unite to fight poverty.

Yadav has come under fire for allegedly breaking COVID-19 quarantine rules – leading him to his removal from a national training camp – but the Sports Authority of India later found his breach to be "unintentional".

"Whatever happened is history now," added Yadav, a World Championship bronze medallist in 2011.

"Right now, I am focusing on winning Olympic gold, my training is going great and I am sure that I will perform well in Tokyo."