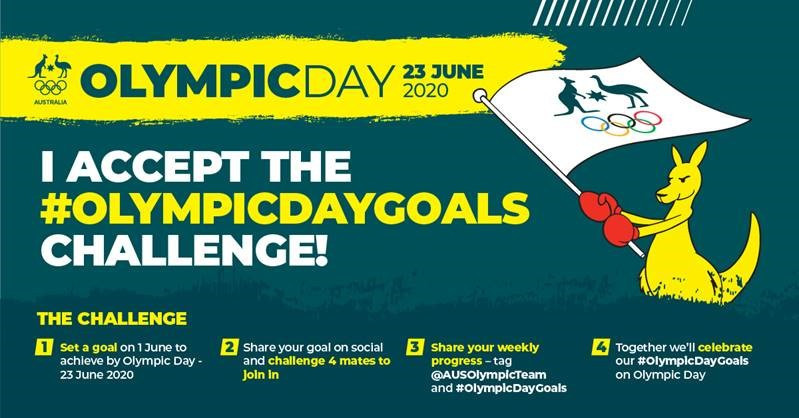 The Australian Olympic Committee (AOC) is encouraging Australians to set personal goals to achieve by Olympic Day on June 23.

The AOC’s challenge comes as athletes are being forced to reassess their Olympic goals following the postponement of the Tokyo 2020 Olympic Games to 2021, due to the coronavirus pandemic.

Challenges for athletes have included separation from team mates and their normal training environment, as well as having to adapt to the disappointment of the Olympic Games postponement.

The AOC has encouraged the public to follow suit and push themselves outside of their comfort zone by setting a new goal, whether it is learning a fresh skill or trying a new sport.

"Sport has such a positive effect for health and social connection," AOC chief executive Matt Carroll.

"Together we are coming through these difficult times, and Olympic Day this year highlights the need for the Olympic values of excellence, friendship, respect and solidarity, more than ever.

"Australians come together every two years to support the Australian Summer and Winter Olympic Teams and Olympic Day is a chance to appreciate what unites us.

"This year, rather than entering final preparations a month out from the Tokyo Olympics, athletes are adapting to working out at home, connecting to teammates by video and coming to terms with a delay to what is a lifelong dream.

"Our Olympians and athletes aspiring to make their Olympic debut have shown incredible resilience, ingenuity and optimism as they reset their goals – and this June we’re encouraging Australians to join in and set themselves a new goal to achieve by Olympic Day."

The AOC has produced goal-setting cards, social assets and an Olympic Day activity planner aimed at providing ideas and challenges for Australians.

Additional school resources have also been produced and can be accessed here.

The day is celebrated every year on June 23.

It marks the date in 1894 when Pierre de Coubertin revived the Olympic Games and founded the International Olympic Committee (IOC) in Paris.

The AOC says the day aims to promote healthy and active lifestyles, with Olympians around the world celebrating the theme of "Move, Learn, Discover".

The AOC has encouraged the public to share their goals on social media by tagging "#OlympicDayGoals" and "@AUSOlympicTeam", along with supporting family and friends to set their own goals.