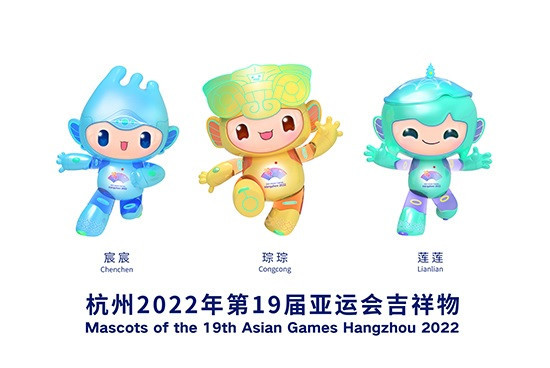 Three sporty robots known as the "smart triplets" have been officially unveiled as the mascots for the 2022 Asian Games in Hangzhou in China.

The robots named Congcong, Lianlian and Chenchen are designed to represent the UNESCO World Heritage sites in the host city of the 19th Asian Games, which are scheduled to take place from September 10 to 25 2022.

The launch event took place via a digital ceremony because of the ongoing coronavirus pandemic.

Organisers have collectively named the robots as the “smart triplets” to reflect the internet prowess of Hangzhou city and Zhejiang province.

It derives its name from the cong jade pendant – the quintessential relic unearthed from the ruins dating back 5,000 years and takes yellow, the colour of earth and bumper harvest, as the main tone.

The second robot Lianlian represents the West Lake and the name signifies a lake full of lotus leaves and is coloured green to stand for life and nature.

It takes its name from the Gongchen Bridge - a landmark structure in the Hangzhou section of the Grand Canal, and the robot is coloured blue to represent science and technology.

"The mascots will surely be liked by all, especially the youth of Asia.”

Speaking during the launch ceremony, Raja Randhir Singh, chairman of the Coordination Committee said the mascots conveyed the smart intelligence of the modern world and the energy of the future.

"The mascots are vibrant and rich in content, integrating Chinese culture, characteristics of the city of Hangzhou and the spirit of the Asian Games and the Asian continent,” Singh said.

As well as the mascot launch, the 20 minute online ceremony also featured dance and cultural performances.

A total of 4,633 submissions for the mascot designs were received by the Organising Committee with the final robot characters created by Zhang Wen and Yang Hongyi, lecturers from the China Academy of Art.

The 2022 Asian Games is due to be the third hosted by China following Beijing 1990 and Guangzhou 2010, and is expected to feature participation from 45 NOCs of Asia across 42 sports.