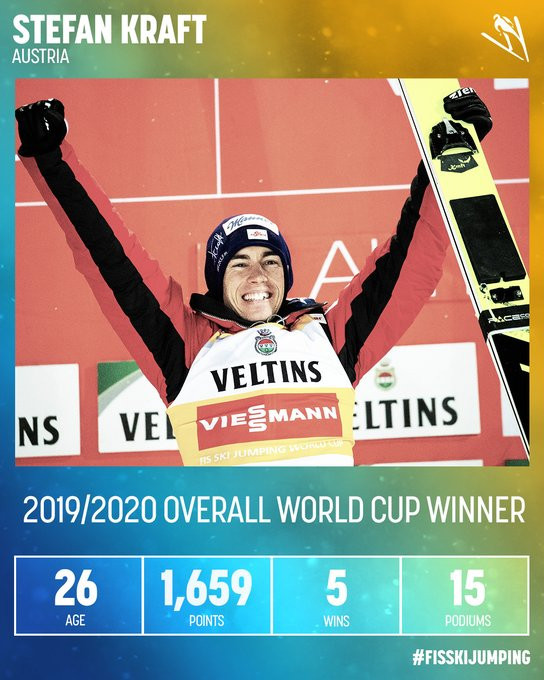 Norway's Maren Lundby and Austria's Stefan Kraft have been crowned overall International Ski Federation (FIS) Ski Jumping World Cup champions after the rest of the season was cancelled today because of the coronavirus crisis.

Both events had to be cancelled after Norwegian health authorities banned events with more than 500 participants due to the outbreak of COVID-19, as it is officially known.

"The health and welfare of the athletes and all other participants, as well as the general public are in the forefront and the priority of all stakeholders," FIS said in a statement.

"The instructions and decisions of the National and Regional Governments and their Health Authorities are decisive in any recommendation regarding public gatherings that impact FIS competitions."

Lundby has now won the crystal globe for three consecutive years, leaving her one short of the record held by Japan's Sara Takanashi.

"It's a very unique situation, but it's happening all over the world and we are not the only ones affected by that," the 25-year-old Lundby said.

"It's not how it was supposed to be but I'll still get the crystal globe.

"It feels a bit strange, but I'm happy."

Kraft has been the outstanding performer in the men's competition, regaining the title he last won in 2016-2017, as he beat Germany's Karl Geiger and Japan's Ryōyū Kobayashi

"It was a little bit weird today, to win it like this," the 26-year-old said.

"I was ready to jump today and claim the title here in Trondheim.

"It was a great season for me."