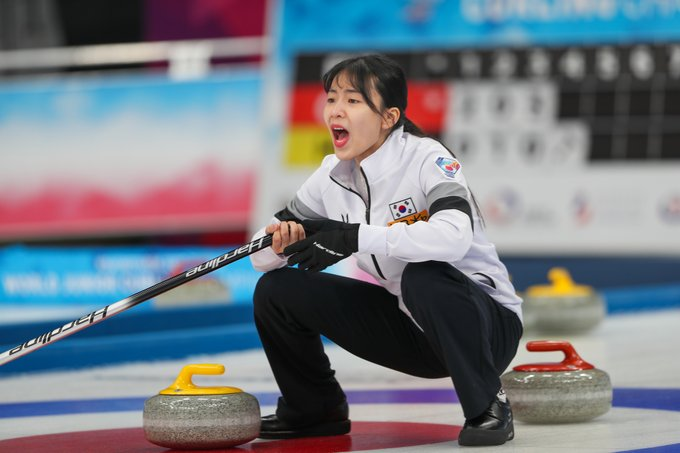 South Korea are on the brink of securing a semi-final place in the World Junior Curling Championships women’s competition after recording a sixth consecutive win in Krasnoyarsk.

The South Korean team headed into the competition hoping to improve on their performance last year at Liverpool in Canada, where they agonisingly missed out on a semi-final place on a head-to-head record.

The team, led by skip Kim Min-ji, bounced back from the setback by winning Winter Universiade silver in Krasnoyarsk and bronze at the senior World Championships at Silkeborg in Denmark.

Kim appears to be on course for further success at Krasnoyarsk’s Crystal Ice Arena, guiding her team to victories in the opening six matches.

Switzerland became the fifth team to suffer defeat to the South Koreans after being beaten 8-3 in the morning session today, before Norway were dispatched 9-3 in the afternoon.

Canada are clear in second place with five wins and one defeat after recording a 12-4 win over Hungary and a narrow 6-5 triumph against Switzerland.

Japan suffered a setback after losing 6-3 to Denmark in the morning session, before a 7-5 loss to hosts Russia.

The results enabled both Denmark and Russia to join the Japanese team in joint third place in the standings.

A separate battle is ongoing for sixth place, which will guarantee teams a spot at next year’s tournament.

Their team then overcame Hungary 11-3 in the afternoon session.

Latvia, Switzerland and Sweden are now tied for sixth place thanks to two wins and four defeats.

Canada and Germany remain top of the men’s standings after winning their only match of the day.

The Canadian team eased to a 7-1 triumph over New Zealand, while Germany beat Russia 10-6.

The joint leaders have a record of five wins and one defeat.

Scotland overcame Norway 7-2 to occupy joint third place with Sweden, who were 5-4 winners against Italy.

New Zealand, Russia and Switzerland remain a threat, with the three teams having won three and lost three of their matches to date.