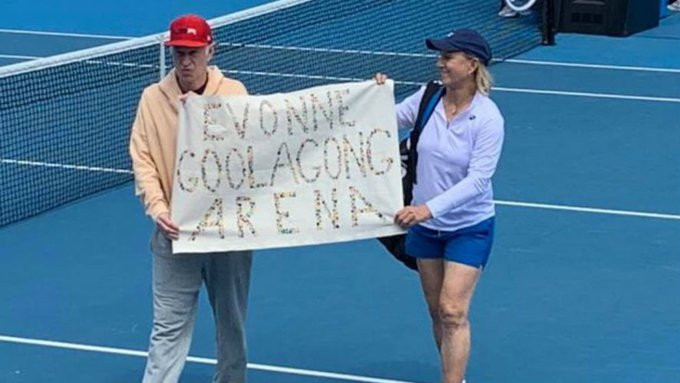 American tennis greats Martina Navratilova and John McEnroe have apologised for breaching Australian Open "protocol" after they unveiled a banner calling for the Margaret Court Arena to be renamed.

The pair have both been critics of Court due to her controversial political views and opposition to same sex marriage.

Navratilova suggested three years ago that Court's name should be stripped from the venue at Melbourne Park, where the Australian Open takes place.

After playing in a legends match, she climbed into the umpire's chair and used the microphone to invite McEnroe onto the court.

They then both unveiled a banner, painted in Aboriginal style, which said "Evonne Goolagong Arena".

Goolagong, who is of Aboriginal heritage, won seven Grand Slams in her career, including four at the Australian Open.

Court, however, won her home event in Melbourne 11 times and boasts 24 Grand Slam titles in all, a record for both men and women.

She received a trophy on Monday (January 27) to mark 50 years since she won all four Grand Slams – the Australian Open, the French Open, Wimbledon and the US Open – in the same year.

The crowd gave her a mixed reception while some fans held the rainbow flag, the symbol of the LGBTQ (lesbian, gay, bisexual and transgender) community.

Tennis Australia said that "two high profile guests" had breached its protocols in relation to the banner.

"I had no idea there was this kind of protocol," said Navratilova, the 18-time Grand Slam winner, who is openly gay, to Tennis Channel.

"Had I known I would have done it differently.

"But I would still have tried and made my statement, which is basically you name buildings after not what people just did on the court but also off the court, the whole body of work."

Seventy-seven-year-old Court, who is now a pastor, claims her views correspond to her Christian beliefs.

In 2017, she caused controversy by saying she would boycott Australian airline QANTAS because of its support for same sex marriage.

She also wrote a letter criticising the birth of Australian tennis player Casey Dellacqua's child in a same sex relationship.

By awarding her a trophy, Tennis Australia claimed that they were "recognising" and not "celebrating" Court's achievements.

They said they did not agree with her personal views which have "demeaned and hurt many".

"We embrace diversity, inclusion and the right for people to have a view, as well as their right to voice that view," the governing body said.

"But the Australian Open has regulations and protocols with respect to how any fan, player or guest can use our facility, the event and the global stage it provides.

"This is to ensure the integrity of our event.

"Two high-profile guests have breached these protocols and we are working through this with them."

The television feed was cut when Navaratilova addressed fans from the umpire's chair.

Earlier this week, McEnroe urged fellow American Serena Williams, who has one fewer Grand Slam title than Court, to beat her record.

He slammed Court for "offensive and homophobic statements" and described her as a "crazy aunt".

"Admittedly I was never one to study the rule book carefully or, for that matter, even at times abide by the rules," the seven-time Grand Slam winner said.

"For that I apologise to Tennis Australia and recognise and appreciate the great job they have done to make the Australian Open a great event for the fans, players and myself."