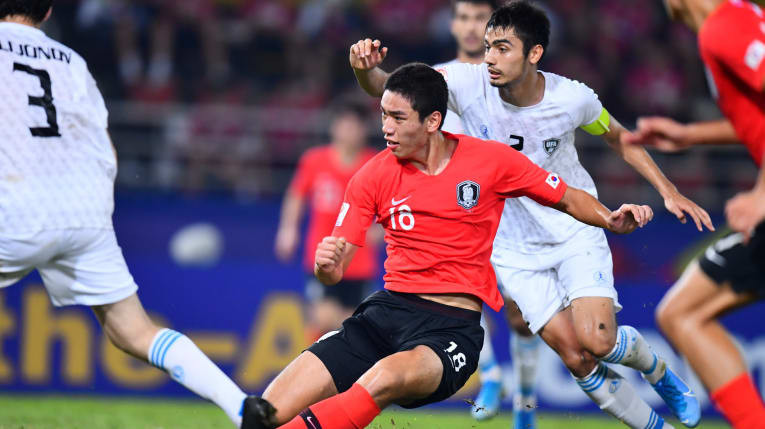 South Korea ended the group stage of the Asian Football Confederation Under-23 Championship in Thailand with a 100 per cent record, seeing off defending champions Uzbekistan today.

Oh Se-hun scored a double in a 2-1 victory at Thammasat Stadium in Rangsit to ensure a third victory from three for his side in Group C.

Despite the reverse, Uzbekistan also crept into the quarter-finals on goal difference at the expense of Iran.

In Group B, Saudi Arabia and Syria booked quarter-final places.

All of the last eight sides have moved one step closer to the Olympics, as the best three teams will qualify for Tokyo 2020.

Oh's first goal had an element of fortune, as Jeong Seung-won's drive deflected off him and into the net after five minutes.

Bobir Abdixolikov headed a 21st-minute equaliser for Uzbekistan, but the defending champions were undone when Oh's superb turn and shot settled the game with 71 on the clock.

Both Uzbekistan and Iran ended on four points, but the former advanced thanks to being one goal better off.

Iran condemned China to their third defeat with a 1-0 success, but it was not enough to advance at Tinsulanon Stadium in Songkhla.

Omid Noorafkan's 87th-minute penalty settled the game, with the Iranians left to rue a string of missed chances.

Saudi Arabia and Syria both started the day with four points in Group B and played each other in Rangsit.

Feras Al Birakan ensured a 1-0 win for the Saudis with a neat back-heel finish with 10 minutes to play, and his country won the group.

Qatar could have leapfrogged Syria with victory, but were held to a 1-1 draw with already eliminated Japan at Rajamangala Stadium in Bangkok.

The Japanese, who will play at Tokyo 2020 as hosts, had Ao Tanaka sent off, but took the lead when Koki Ogawa drove home on 73 minutes.

Abdullah Al Ahrak scored from the penalty spot six minutes later, but they could find no further breakthrough.