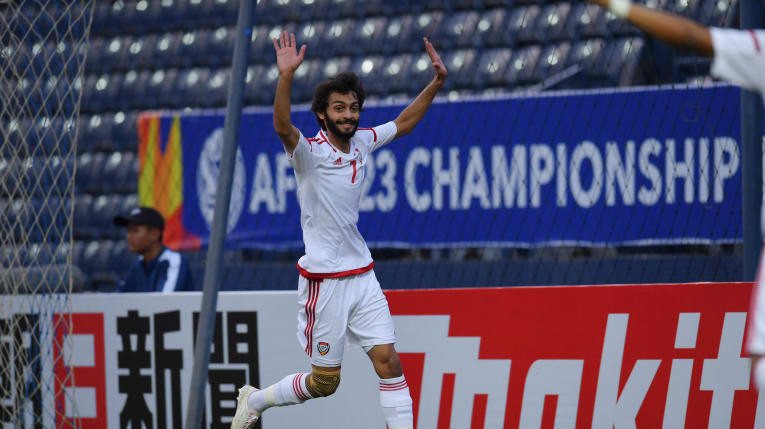 United Arab Emirates defeated North Korea 2-0 to move top of Group D at the Asian Football Confederation Under-23 Championship in Thailand, a tournament which will qualify three sides for the Tokyo 2020 Olympics.

Two first half strikes were enough for the Gulf nation at Buriram Stadium, with centre back Khalifa Al Hammadi slotting home the first through the legs of North Korean goalkeeper Kang Ju-hyok after 17 minutes.

Zayed Al Ameri doubled the advantage on the half hour mark as he turned home a cross from Abdullah Ramadan.

Al Hammadi nearly scored a second with an hour played but his header cannoned off the woodwork.

The UAE victory has moved them onto four points after they drew 0-0 with 2018 runners-up Vietnam in their opening match.

Vietnam recorded their second consecutive goalless draw today as they played out another stalemate with Jordan.

That left Jordan also on four points, after their opening 2-1 win over North Korea, but behind the UAE on goal difference at the top of the group.

UAE will meet Jordan in the final group games on Thursday (January 16), when Vietnam will take on eliminated North Korea.

The top two teams from each group will reach the quarter-finals.

Group A will conclude tomorrow with hosts Thailand taking on Iraq and needing a victory to assure themselves of a last eight spot.

As Japan have already qualified for Tokyo 2020 as hosts, the remaining three semi-finalists will book their Olympic places should they reach the last four.

If not, the two finalists and the winner of the third-place play-off will advance.

The final is scheduled for January 26 in Bangkok.

Men's Olympic football features under-23 sides, although three overage players are allowed in the final squads.