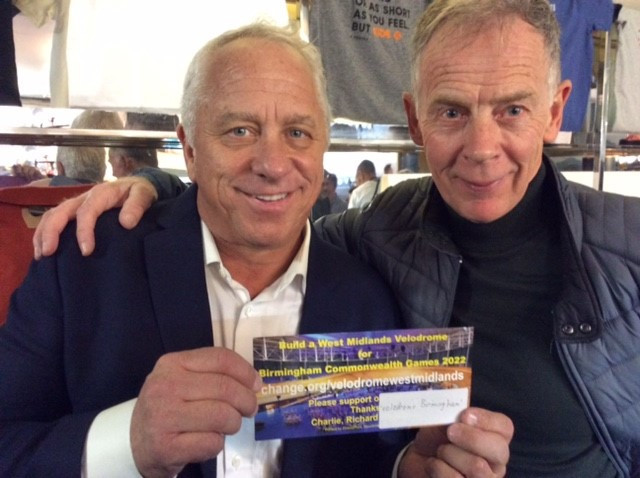 Three-time Tour de France winner Greg LeMond has joined the call for a training venue to be built in the West Midlands as a legacy from the 2022 Birmingham Commonwealth Games.

But in the meantime one of the men behind the proposal, Halesowen Cycling Club chairman Dave Viner, has called for an independent feasibility study to be commissioned after saying he was "concerned" about how long it was taking Birmingham City Council to consider the case.

In April campaigners handed over a petition containing more than 7000 signatures to Ian Ward, the Birmingham City Council leader and chairman of Birmingham 2022.

The campaign began after Commonwealth Games organisers announced Lee Valley VeloPark in London would host 2022's track cycling events, despite being 130 miles away from Birmingham.

The petition organisers acknowledged that the Commonwealth Games cycling would not take place in Birmingham, rejecting the offer of Sport England and British Cycling support in building another competition-standard venue.

But they called for a "more modest training and development velodrome", which it was claimed would leave a strong legacy from the Games and make the sport more accessible to local cyclists.

Wolverhampton-born cycling legend Hugh Porter, a pursuit gold medallist at the 1966 Commonwealth Games in Kingston, was present at the petition handover along with the two instigators of the campaign - Viner and Charlie Dickens from Stourbridge.

Britain’s 1992 Olympic individual pursuit champion Chris Boardman has also voiced his support for the proposal – and now Viner has got LeMond on board.

In a statement about the West Midlands velodrome plans, the 58-year-old United States legend, who was also twice world road race champion, said:

"It was great to hear the passion for cycling, in particular the importance of track riding and racing.

"Few people know that I also raced on the track when I started racing.

“It serves as best foundation for racing no matter what discipline – road, mountain bike, etc.

“I look forward to getting more info from you."

Today was the big day! We handed in our petition to #Birmingham Council leader Ward (who was very supportive) alongside #cycling legend Hugh Porter.

Thanks to everyone who has signed.

Electronic copies of the petition will soon be made available. pic.twitter.com/yKWGLSOlB6

Viner, however, is not satisfied that matters are moving swiftly enough, and told insidethegames:

“In May I gave evidence to the Needs Analysis by 4global into all aspects of cycling facilities, including the velodrome.

“The Needs Analysis was carried out on behalf of BC and Birmingham City Council.

“Although completed some time ago the conclusions have still not been made known.

“We have continued to gather our file of evidence to prove the viability of a low cost, multi-sport, indoor velodrome arena.

about the time it is taking.

“We would like an independent specific feasibility study commissioned.”

At the time of the petition handover, Viner was quoted as saying it was a "golden opportunity" that was being missed, adding: "All we are saying for cycling is to be treated with the same respect with which athletics is being treated, or swimming or other sports."

James Morris, MP for Halesowen and Rowley Regis, has also backed the plans as he believes building a velodrome will be an important part of the legacy of the 2022 games.

"The idea is now firmly on the agenda and I will continue to work with local campaigners to put the case," he told the Wolverhampton Express and Star.