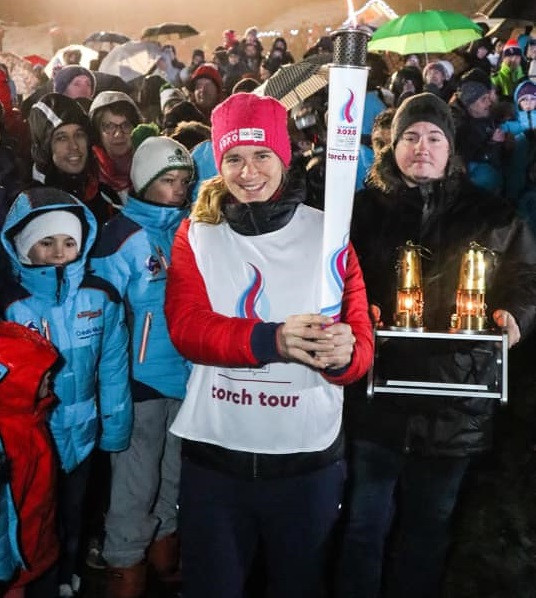 The Lausanne 2020 flame has begun its home run as it heads for a grand re-entry to the Winter Youth Olympic Games host city tomorrow.

Over the weekend it made a brief visit to France where Pyeongchang 2018 biathlon gold medallist Anaïs Bescond lit a cauldron as it crossed the border.

Biathlon, ski jumping and Nordic combined events are due to place in the French resort of Les Tuffes, marking the first time that sport at any Youth Olympic Games has been staged in two countries.

"I like the fact that these Games are French-Swiss," Bescond, a mixed relay gold medallist in Pyeongchang, told Nordic Magazine.

"I cross the border regularly to reach Geneva and we have lots of discussions with the Swiss biathlon team."

A rainy evening failed to dampen enthusiasm when the Torch arrived at the French ski station in Les Rousses.

Bescond came through an avenue of umbrellas to light the cauldron and was accompanied by an escort of young skiers from the region.

"It is with great honour that I light the flame this evening and I wish you all a marvellous Games," she said.

"Enjoy them as they are the first step before the Olympic Games.

"I did not participate in the Youth Olympic Games because they did not exist in my time.

"But this reminds me of the good times I had in Pyeongchang and I wish everyone will have the same."

The flame then crossed back into Switzerland to continue its journey to the Olympic capital.

France's Turin 2006 biathlon pursuit champion Vincent Defrasne was one of the bearers after earlier speaking to local schoolchildren who had the chance to hold his Olympic gold medal.

There was also a surprise appearance from World Biathlon Championships gold medallist Quentin Fillon-Maillet, while 15 young athletes from the region also took part in the Relay.

At Bois d'Amont, close to the border, a cauldron was lit by Thierry Rey, who won an Olympic judo gold medal in Moscow 40 years ago.

He took part as a representative of Paris 2024 and was joined by Lausanne 2020 President Virginie Faivre to symbolise the handover from France to Switzerland.

The Lausanne flame had seen in the New Year at Villars, where it was carried by Switzerland's Grenoble 1968 downhill bronze medallist Jean Daniel Dätwyler.

That race was won by the legendary French racer, Jean-Claude Killy.

"For me Olympism goes beyond being on top of the medal podium," said Dätwyler.

"As an athlete if you can participate in the Games, it is everyone's dream and it is extraordinary."

Freestyle skier Robin Tissieres has been included in the Swiss team for the Games.

"Having the opportunity of carrying the flame to where the competition will take place, this is something that is close to my heart," he said.

"For me, the Olympic Games are a time when all nations come together and sport is highlighted" she said.

On the eve of the Opening Ceremony on Thursday (January 9), a Relay around Lausanne is scheduled to set the scene for the Games themselves.