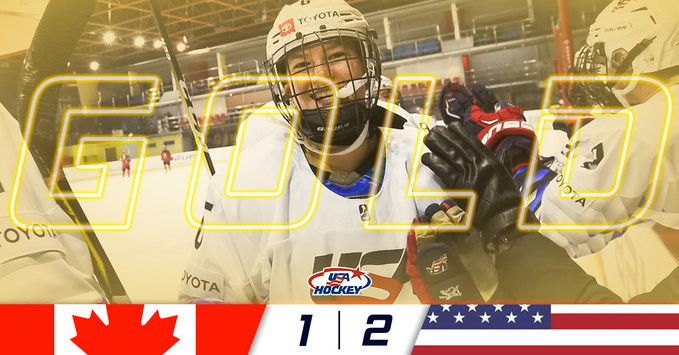 Kiara Zanon scored an overtime winner as the United States beat Canada in the final of the International Ice Hockey Federation (IIHF) World Women's Under-18 Championship in Bratislava.

The 2-1 victory handed the US a seventh title as they dethroned the defending champions at the Vladimír Dzurilla Ice Rink – Hall 1.

Abbey Murphy gave the US the lead in the 14th minute and that was how it stayed until the third period when Sarah Paul restored parity for Canada.

Paul's equaliser 15 minutes from time sent the gold medal clash, the 12th in the past 13 editions of the tournament to feature the North American rivals, into an additional period.

After a tense opening to overtime, the US got the crucial breakthrough when Zanon tapped home a pass from captain Maggie Nicholson.

Team @USAHockey is back on top of the #U18WW🇺🇸🥇🏆 USA defeated @HC_Women in overtime in an epic gold medal game. Check out the highlights! 👇 pic.twitter.com/PJHlF6J3oc

"We were at the end of a long shift and I saw Maggie putting pressure on their defenseman,” stated Zanon.

"Maggie had a one on zero with the back-checker coming down hard.

"So I tried to beat that back-checker.

"She made a beautiful pass and I just had to tuck it home."

Russia took bronze with a comfortable 6-1 victory over Finland.