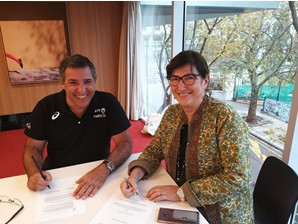 The International Triathlon Union (ITU) has renewed development grant contracts with its five continental confederations for 2020.

The ITU claim the contracts are an "extensive plan that will be implemented throughout the world to support the athletes and coaches development, as well as to increase the participation of women in the sport on all levels, from grass-roots to elite participation".

The Asian Triathlon Confederation will use the funds for talent Identification camps in Malaysia, Singapore, Mongolia, Uzbekistan and India, as well as a Paratriathlon camp in Japan.

A women's camp in the next Olympic host country and a development course in Incheon in South Korea will also be staged by the regional body as part of the contract.

The agreement with the African Triathlon Union aims to support athletes and coaches development towards the Dakar 2022 Youth Olympic Games, the first Olympic event to be held on the continent.

Training camps for development athletes, to be hosted in Sierra Nevada and in Alanya in Turkey, will be held by the European Triathlon Union using the grant.

The Oceania Triathlon Union (OTU) will use the development funds in 2020 to provide support to the ITU mentorship programme.

Funds will be provided to support event organisers for seminars in Tonga, Papua New Guinea, Solomon Islands and American Samoa, while the OTU will also help with preparations for the 2021 Pacific Mini Games in the Northern Mariana Islands.

The Pan American Triathlon Confederation (PATCO) is set to hold a camp for the American triathletes qualified to compete at the Tokyo 2020 Olympics.

Young talent identification camps and Youth Continental development camps in Peru, El Salvador or Trinidad and Tobago will be held with the money.

"For ITU to have a fruitful and productive relationship with all the continental confederations is paramount for us, and I think these five contracts signed with the Continental Presidents show once again the commitment we all have with the development projects, and helping our national federations, athletes, coaches, organisers and technical officials to continue learning."