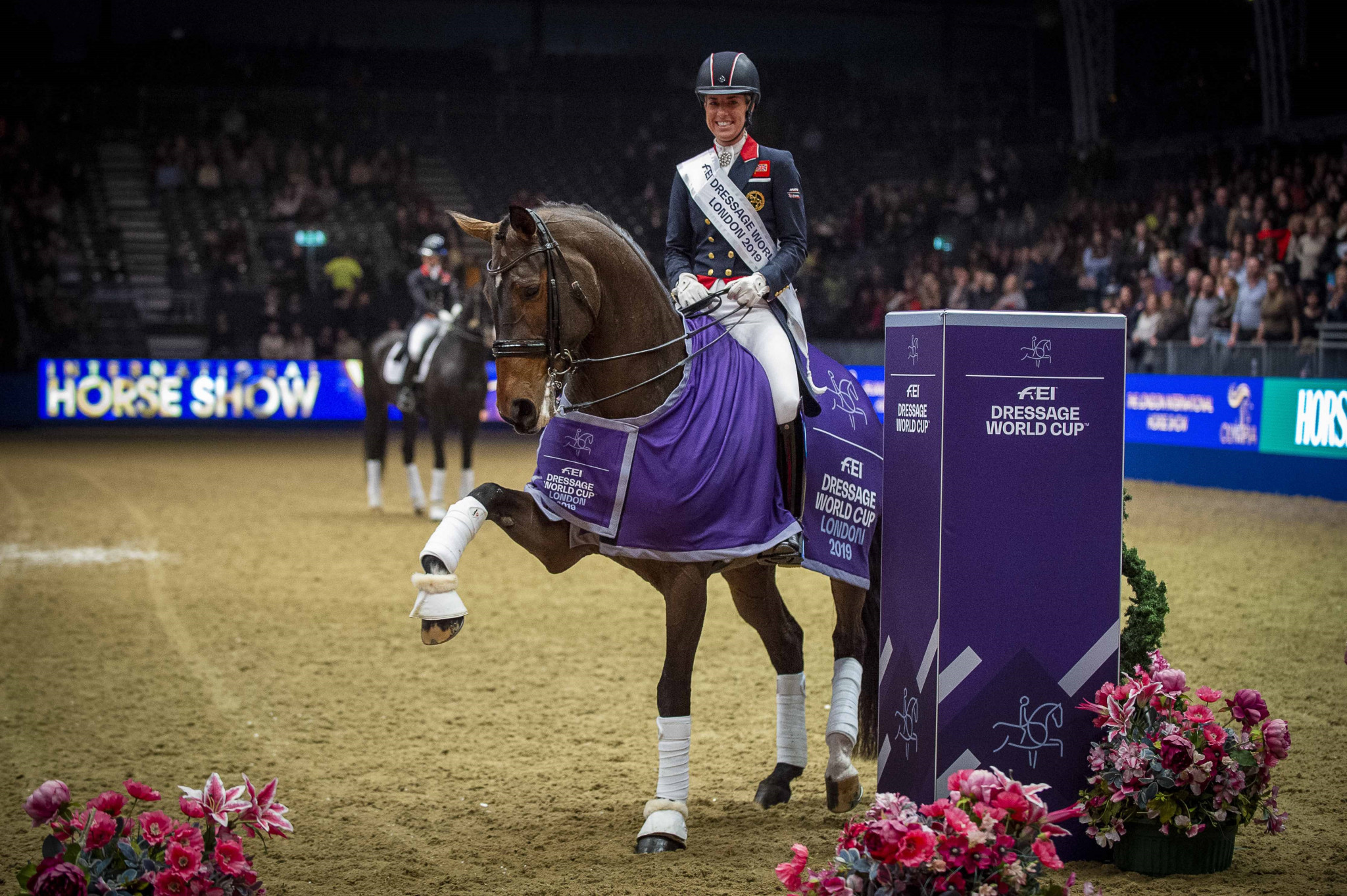 Dujardin's charming 10-year-old mare delivered a stunning test for a mark of 87.520 per cent to take the lead when fourth-last to go at Olympia Grand Hall, only for a technical hitch to delay the scores of the three who followed.

Still waiting for the final result, the riders were all sent back to the stables.

But when the red carpet was finally rolled back out again, Dujardin led the victory gallop ahead of fellow Britons Carl Hester and Charlotte Fry.

Dujardin was delighted with the performance of her mare who has clearly matured a great deal since showing her massive potential at last year's FEI World Equestrian Games in Tryon, where she claimed two bronze medals.

"It's only her third time doing that test, she's very inexperienced at freestyle and I'm so pleased with her," said the 34-year-old, a legend of the sport following her world-beating career with the now-retired Valegro.

"The atmosphere was buzzing, it was a full house and I could really feel it when I rode in.

"But she's coping better and I couldn't have asked any more from her."

Dujardin's friend and mentor, Hester, followed her into the ring and put a score of 84.470 per cent on the board with a lovely performance on Hawtins Delicato.

Taking their first win in the FEI Dressage World Cup, this ever-evolving dream-team delivered a breathtaking performance against the best of the Brits on home soil!

Fry was second-last to go, and the 23-year-old, who alongside Dujardin and Hester was a member of the British side that finished fourth at this year's FEI European Championships in Rotterdam, produced a score of 82.620 per cent with the 10-year-old stallion Everdale.

This was good enough to pip the final partnership, and last year's Olympia winners, Germany's Frederic Wandres and Duke of Britain who finished a close fourth with 82.550 per cent this time around.

Dujardin now has both the Tokyo 2020 Olympic Games and 2020 FEI Dressage World Cup Final in Las Vegas in her sights.

Speaking about her upcoming plans, she said: "Just to carry on doing what I'm doing and see how we go as we prepare for Tokyo.

"I'm hoping to get to Vegas in April, so I'll go to the qualifier in Amsterdam in January and maybe another after that."

Dujardin was twice the winner of the FEI Dressage World Cup title with Valegro, taking her second crown in Las Vegas in 2015.

Today's result sees her move up to eighth on the FEI Dressage World Cup Western European League table, from which the top nine will qualify for next year's Final from April 15 to 19.

Benjamin Werndl leads a German top three on a total of 63 points, with Wandres second on 61 and Helen Langehanenberg third on 60.

There are still five legs of the Western European series left to go, the next taking place in Belgian city Mechelen on December 29.