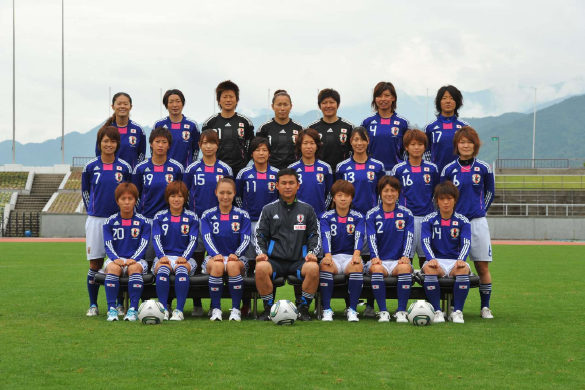 The members of Japan's FIFA Women’s World Cup-winning squad from 2011 will open the domestic leg of the Tokyo 2020 Olympic Torch Relay, the Olympic and Paralympic Organising Committee announced today.

The leg, known as the "Grand Start", is due to take place at the J-Village National Training Centre in Fukushima on March 26 2020.

Tokyo 2020 states the fighting spirit the team displayed during the 2011 FIFA Women's World Cup in Germany inspired many of the people struggling in the aftermath of the Great East Japan Earthquake, which struck the country earlier that year.

Their achievement, which saw them become the first-ever Japanese football team to become FIFA world champions, was recognised by the conferring of a People's Honour Award on the whole team in August 2011.

It came only 30 years after the formation of the first Japan women's football team in 1981.

They went on to win silver medals as runners-up at the London 2012 Olympics and reached the final of the 2015 FIFA Women's World Cup, losing to the United States on both occasions.

All 21 members of the team, captained by Homare Sawa, and former coach Norio Sasaki have been asked to take part in the Torch Relay.

"In the very beginning, when I heard I would be the first runner and Torchbearer I was very, very surprised," forward Kozue Ando, who plays for Urawa Reds, was reported as saying by Reuters.

"But being with all the other World Cup-winning members, we will be able to do something together, so I am looking forward to it."

Also unveiled today was the route of the Olympic flame, which will traverse all of Japan's 47 prefectures, passing by many of the nation's most famous and cherished sights for a period of 121 days.

Serving as a symbol of the Olympic Games, it will visit 858 local municipalities along the way.

The Torch will be carried by Torchbearers on most days, and where necessary will be transported by boat, train or cable car between segments.

The Relay route will take in World Heritage Sites such as Mount Fuji and Itsukushima Shrine, and other historic locations and popular places, including favourite local community spots.

It will also take in areas continuing to recover from natural disasters, such as the Tōhoku region, which was struck by the Great East Japan Earthquake.

Both the Organising Committee and the International Olympic Committee want to use Tokyo 2020 to aid the region's recovery, with some using the term "Reconstruction Olympics".

"The detailed route of the Olympic Torch Relay through Tokyo, which will cap off the Torch Relay, has been announced," Tokyo's Governor Yuriko Koike said.

"The flame, having travelled across Japan, will arrive in Tokyo and depart on the next leg of its journey from Komazawa Olympic Park, a legacy of the previous Olympic Games held in Tokyo in 1964."

She added: "The Torch Relay will be conducted in all Tokyo municipalities, finishing at the Tokyo Metropolitan Government.

"Through the Torch Relay, which will visit wonderful locations in Tokyo, we will show the world our city's diverse attractions.

"Having as many people as possible cheer along the route and take part in the various ceremonies, we will channel the wishes of all of the people of Japan into the Games and build momentum."

Tokyo 2020 will select the Torchbearers for the main section of the Relay from a shortlist of applicants submitted by four presenting partners of the Relay and a single prefectural task force.

Marathon champion Mizuki Noguchi will be the first Japanese person to carry the Tokyo 2020 Olympic Torch.

The Athens 2004 Olympic gold medallist will take the flame from a Greek runner after its traditional lighting at Ancient Olympia on March 12.

Judoka Tadahiro Nomura and wrestler Saori Yoshida, who have both won three Olympic gold medals for Japan, will also carry the Torch in Greece.

A rehearsal of the Tokyo 2020 Torch Relay is scheduled for February 15.