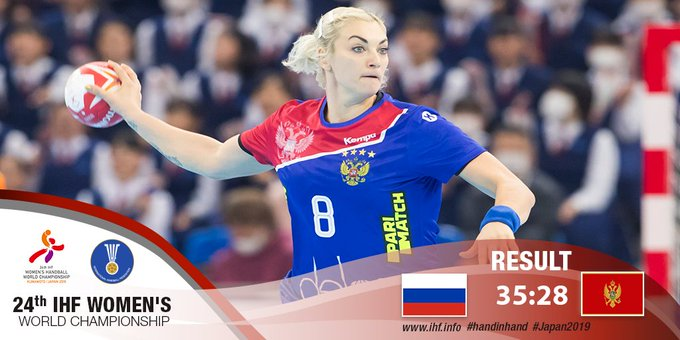 Russia booked their place in the semi-finals of the International Handball Federation Women's World Championship after maintaining their winning run in Japan.

The Russian's had won five consecutive matches in the opening group phase of the event, before beating Romania in their first main round tie.

The results put them on the brink of becoming the first team to secure their semi-final place at the tournament.

A seventh consecutive victory was achieved against Montenegro at the Park Dome Kumamoto.

A tight first half saw Russia earn a narrow 17-16 lead, before they pulled away in the second period to secure a 35-28 triumph.

Yulia Managarova top scored for Russia by finding the net on 12 occasions during the contest.

Semi-finalists 🇷🇺! 💥 Unbeaten @rushandball claim their 7th win at #Japan2019 versus Montenegro 🇲🇪 35:28 in the main round.

"I'm really proud of my team today. It was a really really god job. It's important that we are improving day by day," said centre back @AVyakhireva. pic.twitter.com/bfgrBNcFNu

Spain are set to face the challenge of Russia in their final group match, where defeat could allow Sweden to leapfrog them in the standings.

Sweden kept up the pressure on Spain by earning a comfortably 34-22 victory over Romania.

The final group matches are scheduled to take place tomorrow.

Group I will conclude with The Netherlands faces South Korea before Serbia meet Denmark.

Norway are due to meet Germany in match between the top two in the standings, with The Netherlands, Serbia and Denmark still hoping to advance.