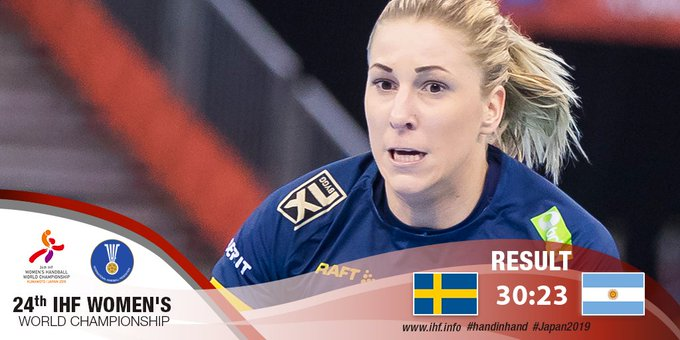 Sweden and hosts Japan earned places in the main round at the International Handball Federation Women's World Championship, despite having mixed fortunes in the penultimate round of group matches.

Japan won their opening two matches in Group D, but defeat to Sweden in their last fixture meant the home team still had work to do to reach the next round.

The Japanese team would suffer a second consecutive defeat at the Park Dome Kumamoto in Higashi-ku, as they were beaten 33-23 by Russia.

The result gave Russia their fourth consecutive victory to keep them at the top of the Group D standings.

Japan would still qualify for the main round due to nearest rivals Argentina suffering a 30-23 loss to Sweden, with the result also taking the European nation through.

A victory in the final group match could still see Argentina move level with Japan, but they can no longer qualify for the main round on their head-to-head record, following an earlier defeat to the hosts.

In a clash between two eliminated teams, the Democratic Republic of Congo secured their first win of the tournament by beating China 25-24.

Norway continued their perfect record in Group A, as their 30-24 triumph over Angola secured a fourth straight victory.

The Netherlands assured themselves of a place in the main draw, prior to their final group match against the Norwegians.

The Dutch team were comfortable 36-23 winners against Serbia, who remain in the three qualifying sports despite consecutive defeats.

Slovenia moved level on points with the Serbian team following a 39-26 victory over Cuba.

It leaves a crucial final match of the group between Serbia and Slovenia, with the winners advancing to the main round.

Angola and Cuba have been eliminated.

Competition continues tomorrow with all four groups set to conclude.

The main round sees the 12 qualifiers split into two groups of six, where teams will seek to secure a place in the semi-finals.