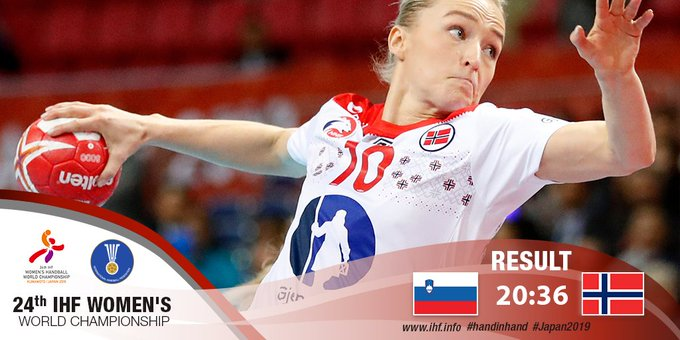 The 2018 World Championship silver medallists had begun the competition with a straightforward win over Cuba.

Their second match was a greater challenge with Norway reaching half-time at the Aqua Dome Kumamoto with a narrow 13-12 lead.

Norway pulled away in the second period to emerge as 36-20 winners, Marit Røsberg Jacobsen top scoring with eight goals.

Serbia kept pace with Norway in Group A as they recorded their second victory.

The European side were 46-27 winners against Cuba.

The Netherlands bounced back from their opening day defeat to Slovenia, overcoming Angola 35-28.

Matches also took place in Group D today, with the home crowd cheering on Japan against the Democratic Republic of Congo.

The Japanese team emerged 28-16 winners at the Park Dome Kumamoto.

They are one of three teams in Group D to boast a perfect record, with Russia and Sweden also boosting their chances of progressing to the main round.

The 24th edition of the event is being hosted in four venues.

The top-three teams from each group will progress to the main draw, involving two pools of six teams, before the knockout stages with the final due to be held on December 15.