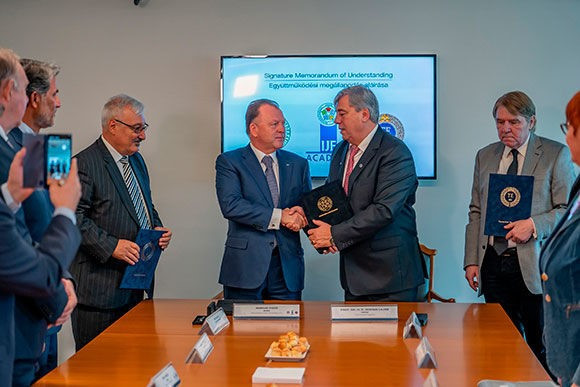 A Memorandum of Understanding (MoU) has been signed between the International Judo Federation (IJF), the IJF Academy and the University of Physical Education of Budapest.

According to the IJF, the agreement will see the organisations cooperate in "various projects at various levels".

IJF President Marius Vizer was among those in attendance at the signing ceremony, held at the rector's office at the University of Physical Education in the Hungarian capital.

Vizer highlighted the importance of education in the life of all sports, as well as the importance of a close collaboration between sports organisations at all levels and academic institutions, during the event.

"The IJF is investing a lot of effort and has a strong focus on education, and the IJF Academy is one of our most successful projects, which has benefited many federations and helped many judokas and coaches in the past six years," Vizer said.

"It is a privilege to have the opportunity to further collaborate in education projects with the University of Physical Education of Budapest, a prestigious institution, with a rich history of 95 years, who is also an important pillar in Hungary's current national sport strategy."

The IJF Academy was established with the aim of educating coaches and to help former judokas continue their path in the sport.

The worldwide governing body moved its headquarters to Budapest from Lausanne in Switzerland in August, although Vizer's Presidential office has been located in the city for far longer.