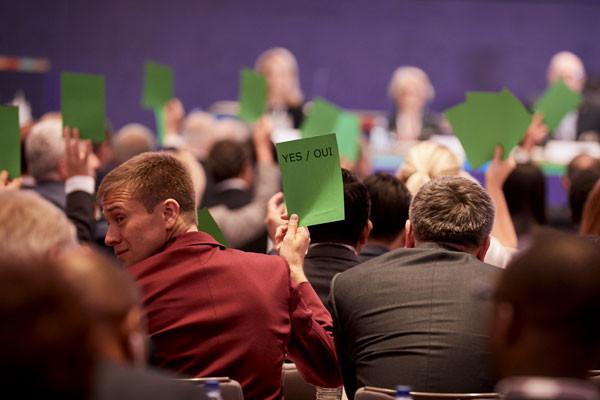 A vote to retain reining as an International Equestrian Federation (FEI) discipline was passed unanimously at the world governing body's Extraordinary General Assembly in Moscow today.

FEI Reining Committee chair Sven Friesecke received extended applause when he thanked delegates profusely for their support of the discipline - designed to show the athletic ability of ranch-type horses in the confines of a show arena - and for their commitment to keeping reining in the FEI stable.

In an attempt to ensure that reining is moving forward in a sustainable way, Key Performance Indicators have been put in place for the next four years aimed at growing participation in the discipline.

FEI President Ingmar De Vos announced 94 votes in favour and 19 against, with no abstentions.

Prior to the overall vote on the endurance rules, voting opened on four amendments supported by the Endurance Temporary Committee (ETC).

It was followed by voting on four additional amendments proposed by National Federations (NFs) during yesterday afternoon's dedicated endurance rules session, and on the date of implementation.

The FEI General Assembly 2019 is underway in Moscow. Follow along live with our blog & live stream here: https://t.co/k9IFwiWCK4 pic.twitter.com/CvACQn0A8V

Votes were all taken by a show of hands and those approved were then included in the overall vote on the endurance rules.

Article 838.3.3 on the exemption from the CEI three-star combination requirement for athletes with elite status was approved, as was Article 836.1.2(b) regarding the proposal to reduce the number of combination rides required for three-star championships from two to one.

In a close vote, 49 were in favour of implementation on July 1 and 55 against, meaning the new endurance rules will be implemented on January 1.

De Vos had opened the vote on the proposed revisions to the endurance rules with a special thanks for the work done by the ETC.

"It's a very special day, not only for endurance, but it's also the birthday of Committee chair Sarah Coombs, and I know what birthday present she would like today."