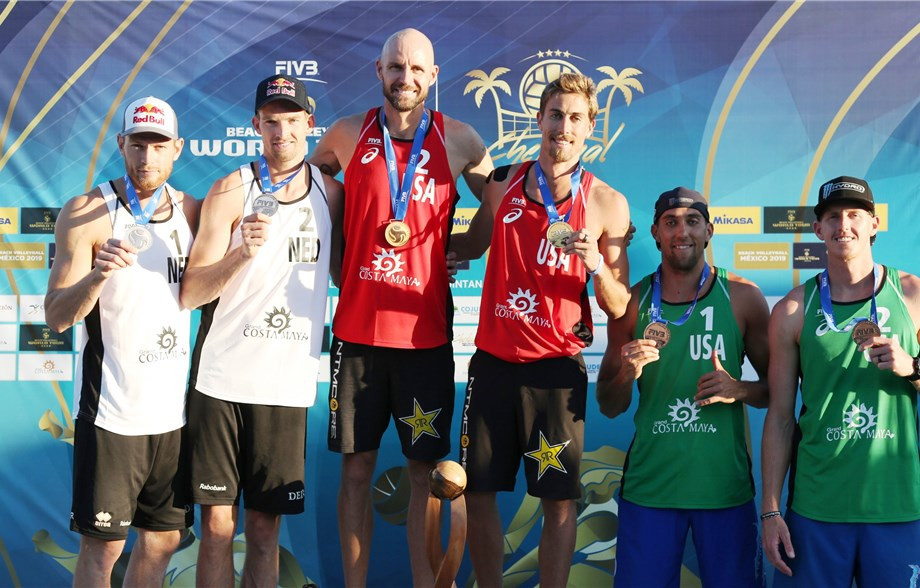 Triple Olympian Jake Gibb made history as the oldest-ever winner of an international beach volleyball gold medal as he won the International Volleyball Federation (FIVB) Chetumal Open alongside Taylor Crabb.

At 43-years-old, Gibb has broken the record held by fellow American John Hyden, who won an event at 41.

"It feels amazing right now," said Gibb, who is 16-years older than his 27-year-old partner.

"That's [the record] obviously pretty cool but what makes it more important to me is that it's my first gold medal with Taylor.

"I have to thank him for believing in me and sticking with me.

"The older I get the more court he covers and that's a wonderful thing.

"Today we're the number one team in the world and we'll enjoy it."

It proved to be a double celebration for Crabb as his older brother Trevor teamed up with Tri Bourne to beat Germany's qualifiers Alexander Walkenhorst and Sven Winter, 21-16, 21-12 for bronze.

The competition is a four-star event on the FIVB Beach World Tour.

In the women's tournament Australia's top seeds Taliqua Clancy and Mariafe Artacho recovered from a set down for the third match in a row to win gold.

"We've played them a lot of times already and we knew they were a really good team," Artacho said.

"We didn't start well, but for us it was just about being patient, sticking to our game plan and believing we could turn things around.

"To win this tournament, it means a lot for us."

Lima suffered an injury to her left arm.