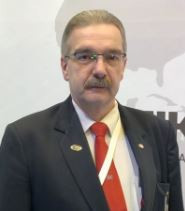 Parage, from Luxembourg, stood unopposed for re-election, which was duly voted by acclamation at Intercontinental Festival City Hotel Conference Centre on the eve of the IPF World Open Powerlifting Championships.

Iceland's Sigurjon Petursson was returned as his vice-president by members, with secretary general Robert Keller from the United States continuing in his role for another term.

Elections for the IPF's regional board members saw Dr Larry Maile from the United States elected to represent North America, with Norway's Arnulf Wahlstrom chosen as the European representative.

Members elected Eric Jioje of Fiji as the Oceania representative, while Marcos Sanchez of Ecuador was voted in as representative for South America.

Commission and committee chairs were also elected during the General Assembly.

The Appeal Committee chair is Bettina Altizer from the US, with compatriot James Cirincione overseeing the Doping Hearing Panel.

Spain's Ralph Farquharson was elected as Coach Commission chair and Briton Richard Parker was elected to chair the Court of Justice.

Cathrin Silberzahn of Germany will oversee the Law and Legislation Commission, while Dr Wing Yuk Ip from Hong Kong was voted as Medical chairman.

Secretary general Keller will chair the Sport For All Commission with Churilova Nadezhda from Russia taking responsibility as Youth Committee chair.

No candidates were received for the Anti-Doping Commission or Media Team, leaving the chair positions on both committees open.

A total of 155 men and 94 women will participate at the Hamdan Sports Complex.

Action begins tomorrow morning with the men's 59 kilograms and 66kg categories, while the women will contest the 47kg and 52kg events.

Russian Sergey Fedosienko, a 13-time champion, is the one to watch in the men's 59kg draw, while compatriot Natalia Salnikova gets her bid for world glory started in the 52kg category.

Ukrainian team mates Andriy Naniev and Mykola Barannik will put their friendship on hold as they prepare for the 83kg contest.

Knute Douglas of the US is the dominant squatter and deadlifter in the field and is expected to challenge for the podium on Wednesday (November 20).

A fierce battle will ensue later in the week for the women's 57kg gold medal.

Reigning world champion Sri Hartati of Indonesia will aim to defend her title but will be wary of Taylor LaChapelle of the US, a junior world record holder in the squat and deadlift disciplines.