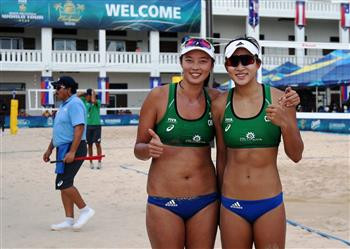 Defending champions Heather Bansley and Brandie Wilkerson were unceremoniously dumped out of the International Volleyball Federation (FIVB) Chetumal Open, as the competition reached the knockout stage in Mexico.

The Canadians were seeking back-to-back titles, but came unstuck against Chinese pair Fan Wang and Xinyi Xia at Plaza Bicentenario.

Thousands had crowded into the centre court for the round-of-16 match, expecting Bansley and Wilkerson to advance, having been undefeated during the pool stage.

But Fan and Xinyi had other ideas and posted a 21-19, 24-22 win to reach the last eight of the four-star Beach World Tour event

"We love the weather and the atmosphere here in Mexico, the fans were amazing," said Fan.

"I think this combination is making us play really well and we needed it today because Canada is one of the best teams in the world, so this was a big win for us."

The Chinese duo will face Miki Ishii and Megumi Murakami from Japan in the quarter-finals after they won 21-15, 21-15 against Spanish pair Amaranta Navarro and Angela Lobato.

Next up is a clash with top-seeded Australians Taliqua Clancy and Mariafe Artacho, who advanced on a 21-14, 23-21 scoreline against German's Kim Behrens and Cinja Tillman.

In the men's draw, Alexander Walkenhorst continued his fine return from injury alongside Sven Winter as they booked a quarter-final spot in Chetumal.

Walkenhorst missed the 2019 World Championships because of a wrist injury and only returned in Qinzhou in China at the end of October.

They reached the last eight in Mexico by overcoming home favourites Lombardo Ontiveros and Juan Virgen 19-21, 22-20, 18-16.

Jake Gibb and Taylor Crabb from the US will meet Austrians Martin Ermacora and Moritz Pristauz in the last eight, with Czech Republic's Ondrej Perusic and David Schweiner taking on Americans Tri Bourne and Trevor Crabb.

The quarter-finals take place tomorrow, with the medals handed out on Sunday (November 17).