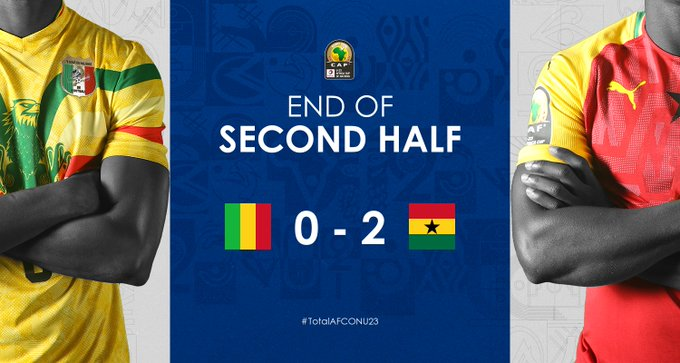 Ghana booked their place in the semi-finals of the Confederation of African Football Under-23 Africa Cup of Nations by overcoming Mali in Cairo.

The Ghanaian team required a victory from their final Group A match and for already qualified Egypt to beat Cameroon to progress to the last four of the competition where the biggest prize is qualification for next year's Olympic Games in Tokyo.

It followed the team securing just one point from their opening two matches, including a 1-1 draw with Cameroon.

Egypt gave Ghana hope early by taking the lead against Cameroon in the 27th minute at the Cairo International Stadium.

It left the two fixtures level at half-time, with both matches held simultaneously.

A header from Mohamed five minutes into the second half saw Egypt restore their advantage over Cameroon.

Cameroon still appeared on course for the semi-finals throughout the majority of the second half despite trailing, with Ghana unable to find an opening goal against Mali.

Ghana eventually found the breakthrough when Owusu Kwabena struck in the 74th minute at the Al Salam Stadium.

One step closer for The Black Meteors! 🇬🇭

Kwabena doubled his and Ghana’s tally nine minutes later to earn the team a crucial 2-0 victory.

It proved enough to reach the semi-finals, with Egypt holding on to beat Cameroon 2-1 in the other Group A tie.

Egypt advance to the semi-finals as Group A winners with a 100 per cent record, while Ghana progressed as runners-up due to having a superior goal difference to Cameroon.

Group B is due to conclude tomorrow with Nigeria playing South Africa and Ivory Coast taking on Zambia.

Ivory Coast occupy second place on the head-to-head record after they beat Nigeria in the first group match.

Zambia have one point and face an uphill battle to qualify for the semi-finals.

The finalists and the winner of the third-place playoff will qualify for Tokyo 2020.