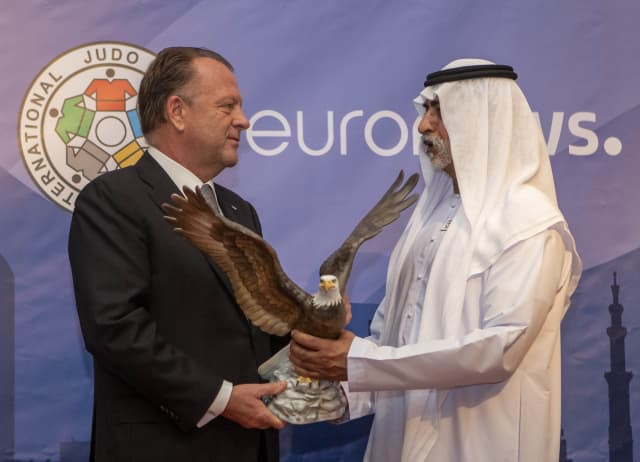 International Judo Federation (IJF) President Marius Vizer has been praised in Israel for his organisation's decision to suspend Iran indefinitely, until they agree to end its policy of refusing to allow competitors to face Israeli opponents.

The IJF on Tuesday (October 22) extended indefinitely a provisional ban issued last month, while investigating a report that Iran ordered a judoka to lose at the World Championships to avoid facing an Israeli in the next round.

Israeli Judo Association President Moshe Ponte praised the IJF and Vizer for banning Iran from events until they give guarantees that they will not boycott matches against Israeli opponents.

"Marius Vizer is an amazing man and a true friend of Israeli sport, and specifically Israeli judo," Ponte said.

"Sport is meant to connect people and not separate them."

Israel Culture Minister Miri Regev also praised the IJF ban, while telling the Times of Israel that she regretted "the heavy price Iranian athletes will have to pay because of their regime's decisions".

Iranian fighter Saeid Mollaei, defending his title at the IJF World Championships in Tokyo in August, claimed he was ordered to throw his semi-final rather than risk facing an Israeli in the final of the under-81 kilograms class.

The Iranian, 27, lost the semi-final and then went on to lose his third-place fight.

Miresmaeili, however, denounced the decision as a "cruel and a blatant betrayal".

"The International Federation shouldn't have taken such a measure against judo in Iran merely based on a false claim by an athlete," he said.

The decision, continued Miresmaeili, would prevent teams of Iranian fighters from various age groups from being sent abroad.

"We will not back off an inch from [Iran's] position and we will stand against this threat with full force," Miresmaeili added.

At the 2004 Olympics in Athens, then world champion Miresmaeili refused to fight Israeli judoka Ehud Vaks.

Vizer is currently in Abu Dhabi for the latest IJF Grand Slam, where last year he brokered an historic deal to allow Israeli athletes to compete under their own flag in the United Arab Emirates.

"We have a moment tonight to celebrate International Fair Play and in particular Israel's first participation at a sporting event in a Gulf country showing humanity and respect around the world," Vizer told guests.

"I want to thank the UAE Government, who've helped us to open the door for international peace and it was not an easy decision, but was one we have welcomed and applauded."