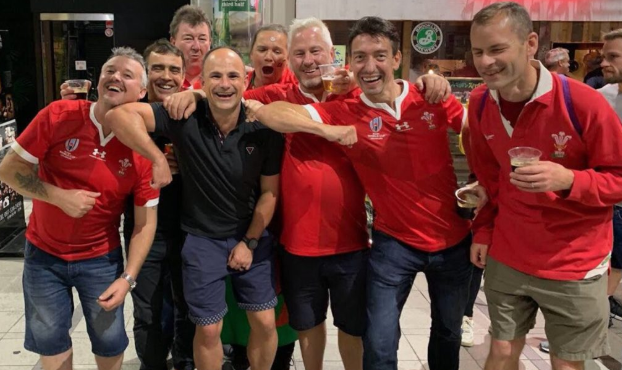 Rugby referee Jaco Peyper has paid the ultimate price for a controversial selfie with Wales fans, being completely overlooked for the World Cup semi-finals.

World Rugby has announced the officials for the matches this weekend, with Welshman Nigel Owens in charge of England against New Zealand on Saturday (October 26).

The Sunday (October 27) last-four encounter between Wales and South Africa has gone to Frenchman Jérôme Garcès.

Peyper sent off France lock Sebastien Vahaamahina against Wales in the quarter-finals on Sunday (October 20) for an elbow to the head of Aaron Wainwright.

The South African whistle-blower was later seen mimicking the act with Wales supporters.

In a statement, the governing body said: "World Rugby can confirm that the match officials selection committee did not consider Jaco Peyper for selection this weekend.

"Peyper recognises that a picture of him with Wales fans, which appeared on social media after the Wales versus France quarter-final, was inappropriate and he has apologised."

Deputy head of the French Rugby Federation Serge Simon responded to the picture on Twitter, claiming that the photo was "shocking and explanations are needed".

However, Wales coach Warren Gatland said: "I just think he's had his 50th cap, he's posing with a few fans and making a bit of a joke about the incident in the game… people make mountains out of molehills, that's how I view the situation at the moment."

"It's ludicrous that the so-called incident is being investigated in any way and for those in the French camp kicking off, I would say you have infinitely more serious things to be considering," he said in the Daily Mail.

"Such as your shambolic coaching and persistent ill-discipline on the pitch which for decades now has seen France underperform."