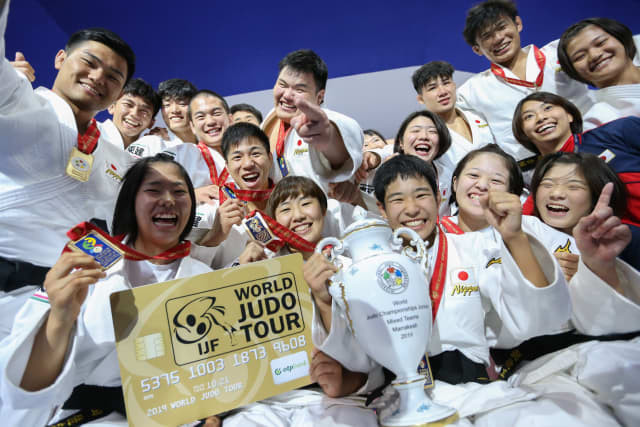 Japan beat Russia in the final of the mixed team event as action concluded today at the International Judo Federation (IJF) World Junior Championships in Marrakech.

Having defeated France 4-2 in the semi-finals at the Moroccan city's Chapiteau - Quartier Agdal, Japan replicated the scoreline in the gold medal match.

The first match of the final came in the men’s under-73 kilograms category and saw Russia’s Makhmadbek Makhmadbekov overcome Japan’s Ryo Tsukamoto, who was disqualified with three shidos for passivity.

Japan equalised at the first opportunity after Mami Asahi beat Dali Liluashvili in the women’s under-70kg, scoring a waza-ari before registering a beautiful left-handed uchi-mata for ippon.

It was only in golden score of the third match, in the men’s under-90kg, that Kosuke Mashiyama could counter Mansur Lorsanov's uchi-mata attempt to score a ippon for Japan's second point.

The Asian nation then extended their lead to 3-1, with Ruri Takahashi winning the women’s over-70kg contest by immobilisation against Russia’s Daria Vladimirova.

Russia pulled a point back thanks to  Valeriy Endovitskiy’s victory over Sosuke Matsumura in the men’s over-90kg, with an opportunist ko-uchi-gari for ippon, but Japan’s success was confirmed when Ayumi Kawada scored twice with superb shoulder movements to down Daria Kashina in the women’s under-57kg.

With this triumph, Japan concludeed a successful year when it comes to team events, having won the seniors world title in Tokyo and the cadets global crown in Astana.

The trophy is designed by Herend Porcelain, official sponsor of the IJF.

It was presented by Haruki Uemura, an IJF Executive Committee member, member of the IJF Hall of Fame and President of the Kodokan Judo Institute.

The first bronze medal match ended in a 4-1 win for Georgia over Germany.

The Georgians were joined on the third step of the podium by France, who beat Brazil 4-2.

Russia reached the final with a 4-3 win over Georgia.

The mixed team event is set to make its Olympic debut as a medal event at Tokyo 2020.