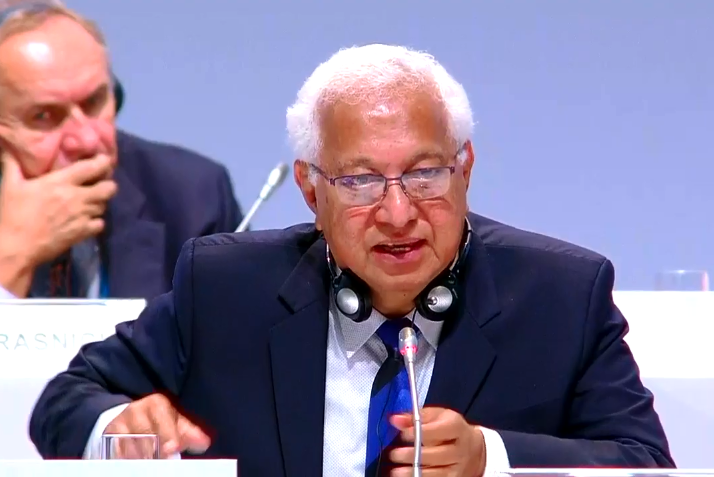 Sheikh Ahmad was the sole candidate for the ANOC Presidency at last year's General Assembly in Tokyo and the Kuwaiti was expected to be elected or another four-year.

It then emerged that he was one of five people accused in Switzerland of creating fake videos to prove two Kuwaiti Government officials were guilty of coup-plotting and corruption.

The General Assembly then, reluctantly, agreed to allow him to stand aside until the case was resolved with delegates having expressed a desire for him to be re-elected.

Mitchell was confirmed as the Acting President, due to his status at the ANOC Senior vice-president.

The Fijian official has served in the role for the past year and confirmed the "existing arrangements" would remain in place for the foreseeable future.

It followed a resolution was approved by the ANOC Executive Council yesterday.

The motion was ratified at the ANOC General Assembly here today.

"Be it resolved that, subject to subsequent Executive Council resolution, the ANOC presidential election be continued adjourned for the balance of the quadrennial term with the ANOC Senior Vice President functioning as the Acting President," the motion read.

Should Sheikh Ahmad's case not be resolved, Mitchell would remain as Acting ANOC President until 2022.

In accordance with the existing quadrennial cycle, a new Presidential election would have to take place in 2022.

Sheikh Ahmad was expected to stand trial earlier this year but the case has been delayed and there is currently no date set for a hearing.

"Many of you will be eager for an update on the status of the Presidency of the organisation," Mitchell told delegates.

"At our Tokyo meeting the only nomination for the role of President was Sheikh Ahmad.

"Nothing has changed since last year.

"Sheikh Ahmad continues to wait for the resolution of affairs before Swiss Courts.

"In the interests of certainty and clarity for ANOC, the Executive Council has after discussions with everyone concerned, taken a decision.

"The existing arrangements remain in place

"Sheikh Ahmad has been involved in the consultations.

"The resolution was unanimously approved by ANOC Executive Council yesterday.

"This ensures that all of us are aware of how things will proceed through to 2022.”

Emmanuel asked whether the situation could be considered a "casual vacancy".

ANOC Legal Commission chair Michael Chambers claimed there was provision for the resolution in the ANOC Constitution.

"When you have something arise that is not covered in the constitution, the authority to deal with that rests with the Executive Council," he said, referencing article 26.1 of the ANOC Constitution.

"It says expressly that the Executive Council should have the power to decide all matters not expressly provided for in the constitution."

Chambers rejected the suggestion the situation could be a "casual vacancy", which under the ANOC Constitution would have required a new election to be held.

Sheikh Ahmad, who denies wrongdoing and claims that the allegations against him are politically motivated, temporarily stepped aside as an International Olympic Committee (IOC) member, as well as ANOC President, last year.

Sheikh Ahmad, one of the IOC's longest-serving members having been elected in 1992, made the decision following a request from IOC President Thomas Bach.