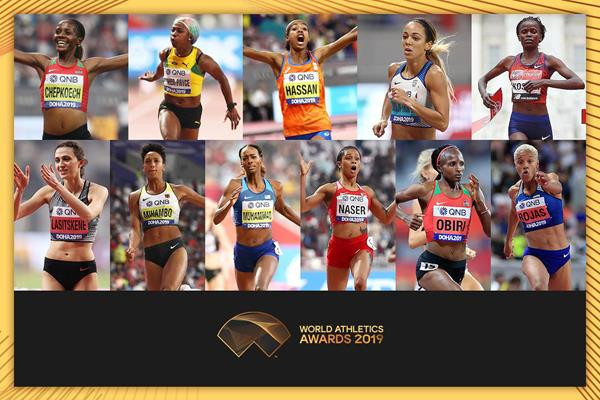 Brigid Kosgei, who broke Paula Radcliffe's 16-year-old world marathon record in Chicago on Sunday (October 13), is among 11 nominations for this year's Female World Athlete of the Year award.

The International Association of Athletics Federations (IAAF) - soon to become World Athletics - also cited the Kenyan's London Marathon win and running the fastest half-marathon of the year in 1:05:28.

The list also includes Dutch athlete Sifan Hassan who won world 10,000 and 1500 metres titles in Doha this month, either side of discovering that her coach since late 2016, Alberto Salazar, had been banned for four years by the United States Anti-Doping Agency.

Two of Kosgei's compatriots are also on the list for the announcement in Monaco on November 23.

The United States is represented by Rio 2016 champion Dalilah Muhammad, who broke her own world record in running 52.20sec to win the world 400m hurdles title in Doha, and added a gold in the 4x400m relay.

Bahrain's 21-year-old Salwa Eid Naser is included after a year in which she won the world 400m title in 48.14 - putting her third on the all-time list - as well as the IAAF Diamond League and Aslan titles.

German Malaika Mihambo, winner of the world long jump title with 7.30m, and Russia's Mariya Lasitkene, competing as an Authorised Neutral Athlete, having maintained her pre-eminence in the high jump by retaining her world title with an effort of  2.04m.

British heptathlete Katarina Johnson-Thompson, who followed European indoor victory with her first global outdoor title in Doha with 6,981 points, the highest total this year, is included on the list.

But her team-mate Dina Asher-Smith, the world 200m gold and 100m silver medallist, is a surprising omission.

Jamaica's double Olympic 100m champion Shelly-Ann Fraser-Pryce is back in contention having won the world 100m title in 10.71, the fastest time of 2019.

There is also recognition for Venezuela's Yulimar Rojas, who retained her world triple jump title with an effort of 15.37m, and jumped 15.41 earlier in the season to move to second in the all-time list.

A three-way voting process will determine the finalists.

The IAAF Council and IAAF Family will cast their votes by email, while fans can vote online via IAAF social media platforms. Individual graphics for each nominee will be posted on Facebook, Twitter and Instagram this week; a 'like' on Facebook and Instagram or a retweet will count as one vote.

Voting for Male World Athlete of the Year closes on 4 November.

At the conclusion of the voting process, five men and five women finalists will be announced by the IAAF.