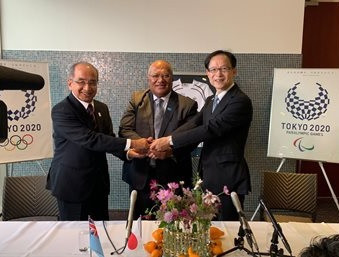 The Fiji Association of Sports and National Olympic Committee (FASANOC) will hold its pre-Tokyo 2020 training camp in Ōita.

Officials from FASANOC have signed an agreement with the City of Ōita and the Ōita Prefecture to confirm the deal.

According to news website Fiji Village, Akita, Saga and Fukuoka made offers to host the Fijian team before the 2020 Olympics in the Japanese capital.

As well as Ōita staging the camp, the deal also includes the exchange of necessary information regarding the pre-Games training base and cooperation with the local areas and organisations.

Fiji’s Ambassador to Japan Isikeli Mataitoga said Ōita was chosen because of its historic ties to the Pacific nation.

In a statement, the Fijian Government said its Embassy in Tokyo "will now coordinate closely with FASANOC, Ōita City and Ōita Prefecture and relevant line agencies in providing the best and smooth facilitation for Team Fiji preparation towards Tokyo 2020 Games".

Fiji's athletes will be based in Ōita, located around 80 kilometres from Tokyo, before the Games get underway.

The nation will be aiming to match their performance at Rio 2016, where the rugby sevens team won their first Olympic medal of any colour, claiming a popular gold.