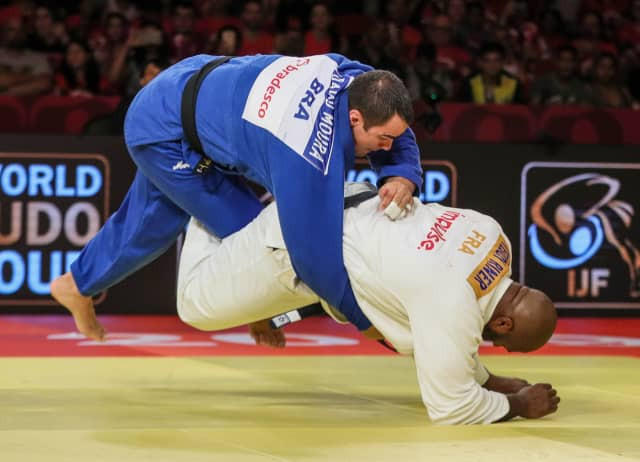 He sealed over-100 kilograms gold in the final in just 20 seconds, winning by ippon against Brazilian David Moura.

It was just a second competition of the year for Riner, who will jump up the world rankings after bagging 1,000 points.

Krpálek recovered from his defeat to Riner to collect bronze, out-manoeuvring Yakiv Khammo from Ukraine to claim a podium place.

The 21-year-old has been dubbed the new "Inoue", after Japanese judoka Kosei Inoue, and he did not disappoint in Brasilia, winning with a morote-seoi-nage throw.

The other bronze was awarded to Miklós Cirjenics of Hungary, when his rival, Egyptian Ramadan Darwish, withdrew with an injury.

The Spaniard needed four minutes to see off his Cuban rival, a trademark uchi-mata earning him a waza-ari score for victory.

Mikail Özerler of Turkey earned bronze after 26 seconds of golden score against Nicholas Mungai from Italy.

The second bronze went to Serbian Nemanja Majdov after Marcus Nyman of Sweden was disqualified for stepping out of the area three times.

The Brasilia crowd were given plenty to cheer in the women's over-78kg contest, as Beatriz Souza defeated world silver medallist Maria Suelen Altheman in an all-Brazilian final.

She edged out Briton Natalie Powell with an ura-nage for ippon after 56 seconds of golden score.

Anna Maria Wagner of Germany took home the other bronze medal with a win against compatriot Luise Malzahn.

The next leg of the IJF Grand Slam will be held in Abu Dhabi between October 24 to 26.