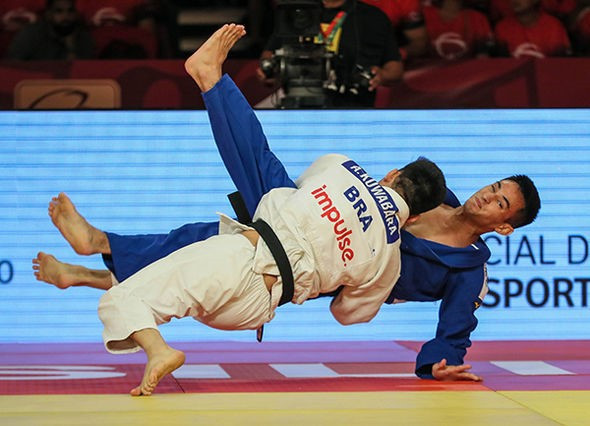 Brazil's world number 202 Allan Kuwabara caused a major upset on the opening day of the International Judo Federation (IJF) Grand Slam by defeating world number one Eric Takabatake to claim the under-60 kilograms title in Brasilia.

Kuwabara had reached the final by beating European champion Islam Yashuev of Russia at Centro Internacional de Convenções do Brasil.

The bronze medals went to Eleudis Valentim of Brazil and Japan's Natsumi Tsunoda.

The Briton won the Düsseldorf Grand Slam in 2018 and sealed a second Slam title with an o-soto-gari for ippon after two minutes of additional time against Brazilian Ketelyn Nascimento.

Germany's Theresa Stoll lost her semi-final to Smythe-Davis in the eighth minute of added time but made amends against Sarah Leonie Cysique of France to earn bronze.

The other bronze medal was won by Rafaela Silva of Brazil, who saw off European Games bronze medallist Telma Monteiro of Portugal.

Silva famously won the Olympic gold medal at Rio 2016 but is now facing a two-year drugs ban after testing positive at the Pan American Games for asthma drug fenoterol and being stripped of her title.